Giving and generosity are acts that Christians are called to, but how are we supposed do it? In this video, Art Rainer gives four biblical principles of giving and answers some important questions about where we are give and how much.

As Christians, how should we think about giving and generosity?

Well, the Bible actually talks quite a bit about this. Throughout Scripture there’s over 2,000 verses about giving, money, stewardship. Jesus actually talked about money more than any other topic while He was here on earth. So there’s a lot of material in the Scriptures that teach us how we are to give and as you study the Scriptures you’ll find four basic principles for giving.

1. Giving is to be a priority

Principle number one is this: We are to make giving a priority. So the Bible tells us that giving is to be a first fruit. That we are to give our first and our best. Practically speaking what this means for us is that we’re to take a portion of our gross income and give that away. Before taxes, before any other expenditures, we are to give. It’s the very first thing that we’re to do with our finances. So giving’s to be a priority.

2. Giving is to be done proportionally

3. Giving is to be done sacrificially

Principle number three is that giving is to be done sacrificially. I know that this is gonna sound a little weird, but giving isn’t always going to feel good. There’s going to be sometimes a struggle and some pain associated with giving.

I mean, you look at 2 Samuel 24:24 when David is offered everything that he needs to make a sacrifice and how did he respond? He said, “No, I will not offer God something that has not cost me anything.” And so we see this idea of sacrificial giving.

4. Giving is to be done cheerfully

Then finally we find that giving is to be done cheerfully. We know that God loves a cheerful giver.

And just so you know, God doesn’t just tell us how to do this. He actually leads us in this. Think about it for a second.

Giving is to be a priority. How does God lead us in this? Well, Jesus. He gave us His first and His best, His one and His only.

Giving is to be done proportionally. How God does lead us in this? Well God is the Creator of everything. He owns it all so He gave us the gift that simply could not be matched. He gave us Jesus.

Giving is to be done sacrificially. How does He lead us in this? Well, maybe that’s a little bit more self-explanatory. It’s Jesus.

And that’s how we are supposed to give. Those are our guidelines for giving as believers.

Now it’s often asked, where do I give? Should it be my local church? Should it be other kingdom-advancing ministries? And the answer in a sense is yes, but I would start with the local church. Why? Because that’s God’s plan for advancing His kingdom. And that’s actually what we see in Scripture. We see giving done through the local church so that needs to be your starting point. Now there’s a lot of other great ministries that are out there and that’s absolutely fine to give to those ministries, but make sure that you’re giving to your local church first. That’s your first place of giving.

Now the next question is obviously, well then how much? How much should I give? You often hear the word “tithe” thrown out there and tithe means 10 percent. And what I want to encourage you if you’re not giving anywhere or not giving anything, is to make 10 percent your goal. It’s a good goal to get to.

However, maybe you’re one that says that 10 percent is something that you’ve been doing all of your life. It was never meant to be a limit. In fact, in Scripture we find giving, both in the Old Testament and the New Testament, way beyond that 10 percent mark. So it’s a good goal to get to and if, once again, if you’re not giving at all, start somewhere. Maybe give one percent for a month or two. Then go to three percent and then seven and work your way toward that 10 percent mark. Also, knowing that that’s ultimately not the limit on your giving. That what you’re really trying to do is align yourself with those principles that we originally set out in this video.

So let’s give generously for the sake of advancing God’s kingdom in our community and around the world. 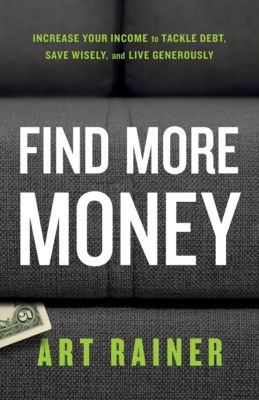 From pastors in the pulpit to people in the pews, many people have cut and cut, but still find themselves struggling to pay the bills. Their full-time job is giving them barely enough to get by; how could they even begin to think about eliminating debt, saving, and living generously?

Art Rainer is the Vice President for Institutional Advancement at SEBTS and author of The Money Challenge: 30 Days of Discovering God’s Design for You and Your Money.