Within the kingdom of God, we’re a family: fathers, mothers, brothers, and sisters. Each of us are called to serve, love, and care for one another as Christ has loved us. However, just as at some point in our biological families we hurt or offend our siblings, we inevitably will wound or be wounded by our spiritual brothers and sisters.

In Matthew 18, Jesus teaches His disciples what to do when sin affects relationships within kingdom community.

Jesus repeated to the disciples what He had previously told Peter: “Whatever you bind on earth shall be bound in heaven, and whatever you loose on earth shall be loosed in heaven” (Matthew 18:18). Jesus extended the authority He’d previously given Peter alone to all the apostles, the future leaders of the church. He gave them authority to proclaim the kingdom, as well as to proclaim what is true and false, right and wrong.

Peter stepped forward to ask a question, possibly considering this authority Jesus shared with him and drawing off the theme of forgiveness. Jesus told a story in response.

“For the disciple of Jesus, forgiveness should characterize his or her life.”

“Then Peter came up and said to him, ‘Lord, how often will my brother sin against me, and I forgive him? As many as seven times?’ Jesus said to him, ‘I do not say to you seven times, but seventy-seven times.'”
– Matthew 18:21-22, ESV

Jews taught and practiced that one should forgive three times (Job 33:29-30; Amos 1:3), so Peter’s suggestion of forgiving seven times goes far beyond what he believes is expected. Jesus answered with “seventy-seven times.” It’s not that His disciples should keep count, forgiving right up to 77 times and then no more. For the disciple of Jesus, forgiveness should characterize his or her life. Jesus told a parable to illustrate what He meant.

Parable of the Talents

“Therefore the kingdom of heaven may be compared to a king who wished to settle accounts with his servants. When he began to settle, one was brought to him who owed him ten thousand talents. And since he could not pay, his master ordered him to be sold, with his wife and children and all that he had, and payment to be made. So the servant fell on his knees, imploring him, ‘Have patience with me, and I will pay you everything.’ And out of pity for him, the master of that servant released him and forgave him the debt. But when that same servant went out, he found one of his fellow servants who owed him a hundred denarii, and seizing him, he began to choke him, saying, ‘Pay what you owe.’ So his fellow servant fell down and pleaded with him, ‘Have patience with me, and I will pay you.’ He refused and went and put him in prison until he should pay the debt. When his fellow servants saw what had taken place, they were greatly distressed, and they went and reported to their master all that had taken place. Then his master summoned him and said to him, ‘You wicked servant! I forgave you all that debt because you pleaded with me. And should not you have had mercy on your fellow servant, as I had mercy on you?’ And in anger his master delivered him to the jailers, until he should pay all his debt. So also my heavenly Father will do to every one of you, if you do not forgive your brother from your heart.”
– Matthew 18:23-35, ESV

Jesus indicated through the parable that a person who truly understands the grace and mercy they’ve been shown by God will also be merciful and forgiving toward his or her brothers and sisters when sinned against. Who are we to hold a small debt over a brother or sister’s head when God has forgiven all our sins in Christ?

Forgiveness is not saying, “It doesn’t matter,” or “It’s OK. Let’s move on,” or “The past is the past. Just forget about it.” Forgiveness doesn’t attempt to ignore a wound as if it didn’t happen. Biblical forgiveness means there is a debt to be paid—a wrong has been done and that wrong has had consequences—but we’re choosing to erase the person’s debt to us. We don’t expect them to somehow make up for what’s been done. Forgiveness isn’t typically instantaneous, but rather a continued choice not to renew or count up someone’s debt again. We can only do this by recognizing and resting in the all-encompassing mercy we’ve been shown through Jesus. The kingdom family is one characterized by this kind of repentance and forgiveness.

This post is an excerpt from Christine Hoover’s Bible study, Seek First the Kingdom. 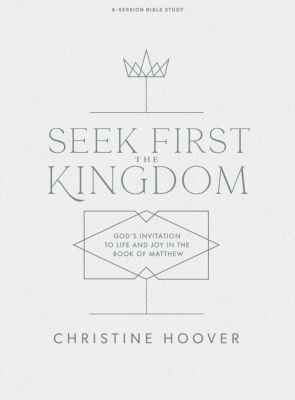 In In this 8-session study, cut through life’s clutter with Jesus’ words, and reorient yourself solidly around the kingdom and the King who gives life in abundance.

Christine Hoover is a pastor’s wife, mom of three boys, host of the "By Faith" podcast, and author of several books, including "With All Your Heart: Living Joyfully Through Allegiance to King Jesus," "Searching for Spring," "Messy Beautiful Friendship," and "From Good to Grace." Her work has appeared on "Christianity Today," "The Gospel Coalition," and "For the Church." Originally from Texas, Christine and her family live in Charlottesville, Virginia, where they planted a church in 2008. Find her at her home online at ChristineHoover.net.