“Now the serpent was more crafty than any other beast of the field that the LORD God had made. He said to the woman, “Did God actually say, ‘You shall not eat of any tree in the garden’?” 2 And the woman said to the serpent, “We may eat of the fruit of the trees in the garden, 3 but God said, ‘You shall not eat of the fruit of the tree that is in the midst of the garden, neither shall you touch it, lest you die.’” 4 But the serpent said to the woman, “You will not surely die. 5 For God knows that when you eat of it your eyes will be opened, and you will be like God, knowing good and evil.” 6 So when the woman saw that the tree was good for food, and that it was a delight to the eyes, and that the tree was to be desired to make one wise, she took of its fruit and ate, and she also gave some to her husband who was with her, and he ate. 7 Then the eyes of both were opened, and they knew that they were naked. And they sewed fig leaves together and made themselves loincloths.

8 And they heard the sound of the LORD God walking in the garden in the cool of the day, and the man and his wife hid themselves from the presence of the LORD God among the trees of the garden. 9 But the LORD God called to the man and said to him, “Where are you?” 10 And he said, “I heard the sound of you in the garden, and I was afraid, because I was naked, and I hid myself.” 11 He said, “Who told you that you were naked? Have you eaten of the tree of which I commanded you not to eat?” 12 The man said, “The woman whom you gave to be with me, she gave me fruit of the tree, and I ate.” 13 Then the LORD God said to the woman, “What is this that you have done?” The woman said, “The serpent deceived me, and I ate.”

14 The LORD God said to the serpent, “Because you have done this, cursed are you above all livestock and above all beasts of the field; on your belly you shall go, and dust you shall eat all the days of your life.”

When you think of the beginning of the Advent story, what do you imagine? Most of us probably picture a stable—a manger, maybe—filled with animals, a newborn Jesus, proud new parents, and lots of visitors. We think of shepherds and angels. But the story really begins way before that—in a garden.

You’ve probably heard Genesis 1 many times. God created the world—the sky, sea, land, plants, animals—and He said it was good. Then, He created people—and He said it was very good. Genesis 1:27 even tells us He created humans, male and female, in His own image! From the very beginning, people were set apart for a special relationship with God and a special role in caring for the rest of creation. At this point in the story, creation functioned in perfect order according to God’s beautiful design and man walked in an unbroken relationship with God, fully known and unafraid.

“From the very first moment we needed it, God had a rescue plan.”

But in an instant, everything changed as Adam and Eve disobeyed God’s good instruction. Tempted by the snake, Eve ate the fruit from the one tree God had forbidden them to eat from. Eve offered the fruit to Adam, and he ate, as well. When they ate the fruit, they brought sin into the world. Instead of enjoying the relationship they had with God, they wanted to become just like Him. Because of that one decision to disobey Him, their fellowship with God was broken, peace was disrupted, and creation was thrown into chaos. Darkness, depravity, fear, shame, and selfishness flooded the human heart—separating people from God.

But from the very first moment we needed it, God had a rescue plan. He addresses Adam and Eve, later turns to the serpent, declaring that sin would not have the final say and that Satan would not prevail. Even amid the darkness, God spoke a word of hope, promising a Savior who would one day defeat the enemy and deliver God’s people.

Read More from Matt and Lauren Chandler at lifeway.com 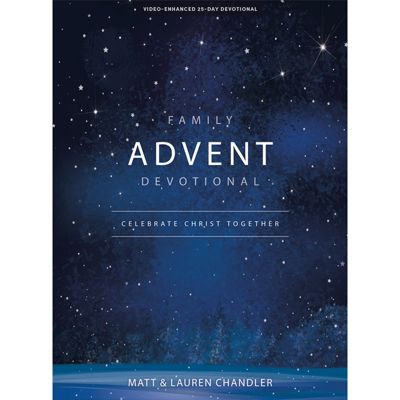 Entering into the Christian season of Advent helps to reorient our hearts and minds away from the false stories of the world. This Advent, reflect on and celebrate the story of Jesus’ birth as a family through this video-enhanced 25-day devotional..

About Matt and Lauren Chandler

Matt and Lauren Chandler have been married for over 20 years—they met when Matt spoke at a camp that Lauren attended. They have had the opportunity to teach through writing, speaking, and leading worship across the world in various platforms. Matt and Lauren have been in ministry at The Village Church in Flower Mound, Texas, for nearly 20 years. They have three children, Audrey, Reid, and Norah.