The story in Exodus 3:1-10 happened in the desert, in the wilderness. Moses was tending his father-in-law’s flock on “the far side of the wilderness” (v. 1, NIV). We often think of a desert or wilderness as something we want to get out of. But the Jewish people view the desert as the place where the Lord often meets His people and speaks to them.

God meets us in the desert

In the desert—the wilderness—God meets you and teaches you unique lessons that these dry and barren places frame in a way no other place would. In the Middle Eastern culture, the wilderness is seen almost as a sacred place, a place of intimacy, where God speaks a “word” (davar) to you. 1

This story of Moses in the desert is about the Living God who “[saw] the misery of [His] people in Egypt” (Exodus 3:7a, NIV). He “heard them crying out because of their slave drivers” (Exodus 3:7b, NIV). He was “concerned about their suffering” (Exodus 3:7b, NIV). He responded to what He saw and heard by coming down to rescue them. In the Bible, when we read that the Lord “sees” or “hears” something, those words signal to us that He is going to act. (It’s not as if God has missed something—as if He were a man who could turn away and miss a glimpse or whisper of something that has happened. God is omnipresent; He sees and hears everything that happens to us.) He is responsive, alive, awake—ever-ready to come to the rescue, to attend to His children in guidance and love.

“How do I remember the word the Lord taught me in the wilderness?”

This story isn’t so much about a burning bush but about the Living God who refuses to look away. He chooses to see, to hear, to let it matter—to let it all matter. And it’s about the Living God who isn’t afraid to come down, get in the middle of the ruins of this world, and put His hands all over them to restore us. We run from drama. The Lord runs into it to bring rescue, restoration, and renewal.

Therefore I am now going to allure her;
I will lead her into the wilderness
and speak tenderly to her.
There I will give her back her vineyards,
and will make the Valley of Achor a door of hope.
There she will respond as in the days of her youth,
as in the day she came up out of Egypt.
“In that day,” declares the Lord,
“you will call me ‘my husband’;
you will no longer call me ‘my master.’
I will betroth you to me forever;
I will betroth you in righteousness and justice,
in love and compassion.
I will betroth you in faithfulness,
and you will acknowledge the Lord.”

You may be familiar with the message of the Book of Hosea. The prophet Hosea (under the inspiration of the Holy Spirit) compared God’s relationship with His people to a marriage relationship—a marriage in which Israel, God’s people, was repeatedly unfaithful to God.

In the Hosea 2 passage above, we find an almost shocking illustration of God’s covenant faithfulness to His children. The Living God marries His people in the wilderness, the desert, despite their unfaithfulness to the covenant He made with them. This passage pictures God’s extraordinary, sacrificial love.

“The Lord often speaks to His people in a special way in wilderness seasons.”

Israel would go on to do her worst while God did His best. She would chase after the gods of the nations. In other words, the bride in this illustration, the people of Israel, would not live up to her marriage vows. She would prostitute herself before the nations—just as Gomer was unfaithful in her marriage to Hosea (3:1). But God’s love runs longer than our sin, and His atonement covers the whole of our sin. God and God alone would keep the marriage covenant. The Lord married Israel knowing she would not be able to keep every law, every commandment, and every vow. He did it because He knew He could and would. He knew that the Lamb of God would come one day to take away every sin.

The Lord drew Israel into the desert and spoke to her there. The place that seemed to only represent barrenness became one of restoration and redemption, of covenant pledge, of love everlasting. To me, Hosea 2 is one of the most beautiful passages in the whole Bible. It is so intimate, so intentional—the covenant love and promise of the Lord given to His people in the desert.

The Lord often speaks to His people in a special way in wilderness seasons. We want to carry these lessons and these times of intimate fellowship from the wilderness with us as we live and walk forward.

This post was adapted from Kristi McLelland’s Jesus and Women Bible study, available soon as an online Bible study here. 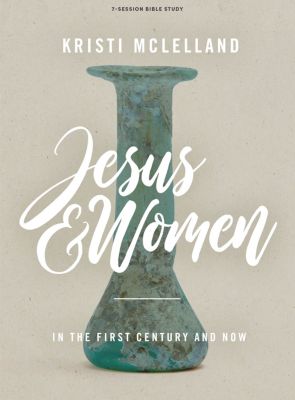 Imagine walking the dusty roads of Galilee with Jesus of Nazareth—braving jostling crowds just to touch the edge of His cloak and hear Him say, “Take heart, daughter, your faith has healed you.” Those words, once meant to comfort a hurting woman’s soul thousands of years ago, were also meant for you. Over 7 sessions, examine the historical and cultural climate of first-century Middle Eastern society to not only understand Jesus more deeply but to fuel your worship of Him today.

Kristi McLelland is a speaker, teacher, and college professor. Since completing her Masters in Christian Education at Dallas Theological Seminary, she has dedicated her life to teaching people how to study the Bible for themselves through a Middle Eastern lens. Her great desire for people to truly experience the love of God has led her to guide biblical study trips to Israel, Turkey, Greece, and Italy. To learn more about Kristi’s upcoming trips, speaking, and more, visit newlensbiblicalstudies.com.