Elizabeth and Zechariah were righteous followers of God. Zechariah was a priest, and Elizabeth was from a family of priests as one of the “daughters of Aaron” (Luke 1:5). They kept God’s commands and devoted their lives to Him. Still, they never had children “because Elizabeth could not conceive, and both of them were well along in years” (v. 7). Their days of hoping and praying for a child had long since passed. But that didn’t matter to God (Luke 1:8-17).

Your Prayer Has Been Heard

The first thing the angel told Zechariah after calming his fears was, “Your prayer has been heard” (v. 13). How many years had Zechariah and Elizabeth prayed for a child? And how many years had it been since they had given up hope of that child ever being a reality in their lives? Regardless, God heard their prayers and knew their hopes.

Zechariah’s initial response to the angel was one of doubt and skepticism, which makes sense considering the news he received. Practically speaking, Elizabeth and Zechariah were older people. Their biological window for childbearing had come and gone, and they didn’t have any reason to think having a child was still possible. But their time frame wasn’t the same as the Lord’s. Nothing could stop God from fulfilling His plan and doing the impossible—giving Elizabeth and Zechariah a son. Gabriel told Zechariah that because he doubted what he was told (words Gabriel delivered from God Himself), he wouldn’t speak again until the child had been born and named John.

To be honest, there may be times when God’s promises feel too good to be true. The world feels too dark. Our circumstances feel too painful. Our hearts feel too broken. And yet, because God’s promises are rooted in His character and not in our circumstances, we can trust every single one. Without fail, God keeps every promise. His Word tells us He’s true. His Spirit affirms that He’s true. When we open our hearts to the possibility that He is trustworthy, He will never, ever let us down. Nothing—not even the “impossible”—will keep God from fulfilling His plans and purposes.

“Without fail, God keeps every promise.”

Elizabeth’s heart praised the One who answered her prayers. She saw God’s grace and mercy in this miracle, and she rejoiced in His goodness. Trusting in the Lord isn’t always easy when our circumstances are unclear or difficult. However, the Lord brings encouragement and hope for us even on the darkest days through His Word and His presence.

For more than nine long months, Zechariah couldn’t speak. He was daily reminded of his moment of doubt, but that didn’t stop the praise from flowing from his lips the moment he could speak again. The lessons he had learned about God and His faithfulness during this season of silence must have been remarkable. And praise rang forth from the overflow of a heart in awe of God’s faithfulness.

At the end of this eventful first chapter of Luke, the Holy Spirit filled Zechariah, and he proclaimed a prophecy about what God would do through not only his son, but even more importantly through the Messiah who would bring all these things to pass. He spoke of salvation and rescue and forgiveness and peace.

That’s the story of Advent and the truth for us to carry through this Christmas season. God’s merciful compassion overflowed to humanity through the birth of a baby boy who would “visit us from on high to give light to those who sit in darkness and in the shadow of death, to guide our feet into the way of peace” (Luke 1:78-79, ESV). God’s promises of salvation and peace came true in Jesus, and they continue to come true in our lives today because of Jesus.

The story of Zechariah, Elizabeth, and John is a reminder that often the sweetest answers to prayer are the most unexpected and unlikely. When we’ve given up hope, that’s when God reminds us that He is still working. He is still faithful. And He is the fulfillment of our hope.

This post was adapted from the new Advent Bible study from Lifeway Women, Our Hope Has Come. 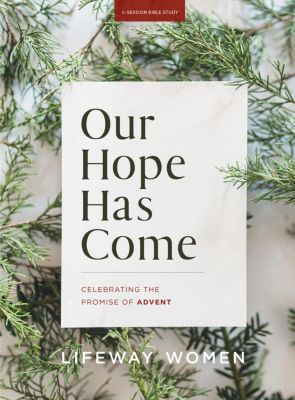 Our Hope Has Come

In this 5-session Advent study, you’ll find encouragement from the lives of people in the Bible who trusted God’s promises and said yes to God’s plans. Join us as we celebrate God’s kindness and choose to trust in His promises, even when the future seems uncertain. Yes, our Hope has come, and at just the right time, He will be back.

Tessa Morrell is a production editor for ongoing curriculum at Lifeway. An Illinois native, she has called Nashville home for 10 years now. She is passionate about serving in her local church and studying the Word of God with others in Bible study. When she’s not busy reading, she enjoys visiting local coffee shops, spending hours browsing in antique stores, and crafting and creating art.