Have you ever had that feeling you’re just not growing spiritually? You’re doing all the right things—attending church, reading your Bible, participating in a small group, and praying. Maybe you even attend extra Bible studies or conferences to help you grow. But you still find that overall, you feel spiritually stagnant. As a pastor, I can’t tell you how many times I’ve heard people say some version of “I don’t feel I’m growing.” Many Christians wrestle with this issue, and the cause of this common feeling is a fundamental misunderstanding of what it takes to grow.

A young high-school basketball player was hungry to join the NBA. You could find him practicing to overcome his weaknesses, both before and after practice. His passion propelled him into a full scholarship at a major university. The stats he was putting on the board were unheard of for a freshman athlete at a school of that magnitude. Soon NBA scouts began to circle like hawks to get him. After arriving in the NBA, however, the young man seemed to lose his passion for the game. A large contract with guaranteed money had become an enabler for laziness. He could have been one of the top three players in the league if he’d retained his high-school work ethic. He needed to remember that the same practices that got him to the NBA were the same practices that would keep him there.

Many of us wonder why we’re not growing in our spiritual lives. A lot of times it’s because we think our growth depends only on us—that we have to work to achieve it all on our own. But it’s the work of Jesus on the cross that brings us into a relationship with God, keeps us in a relationship with God, and grows us in our fellowship with God. Unlike the basketball player who had to rely on his own work ethic, not only to get him to the NBA but also to keep him there, the gospel functions in the spiritual life on our behalf. Now we still have skin in the game, as we’ll talk about later, but it’s the gospel and the work of the Holy Spirit in our lives that propel us to grow closer to the image of Christ.

It’s essential that we view our spiritual lives as a process of being conformed to Jesus Christ, because whether or not we realize it, we’re being conformed to something. Paul said it this way: “Do not be conformed to this age, but be transformed by the renewing of your mind, so that you may discern what is the good, pleasing, and perfect will of God” (Romans 12:2)

A continuous return to the gospel will help us move our hearts and lives toward greater conformity to Christ. God begins this ongoing process when we’re saved, and He completes it by the same means it began—through the gospel.

“Have you ever had that feeling you’re just not growing spiritually?”

Paul wrote many letters to churches in the first century, mentioning the gospel more than 60 times in the letters of the New Testament. This fact is notable because Paul wrote these letters to groups of people who were already believers, as we saw in the previous example. Paul was constantly speaking about the gospel to believers.

Sanctification Is Not Separated From God

Scripture is clear that the gospel not only saves us but also grows us. It’s also clear that the Holy Spirit plays a central role in our sanctification. We can’t lose sight of that fact. If our theology is to be gospel-centered, we mustn’t forget the Holy Spirit. He’s the One who applies to us every component of the gospel. We don’t grow and conform to the image of Christ in our own strength.

Sanctification mustn’t be seen as separate from the gospel but as a part of it. It’s an extension of the gospel.

For too long the church (in some sectors) has had a reductionistic view of the Holy Spirit. In many cases He’s understood simply as an idea from the Bible. We’ve ignored and therefore disconnected ourselves from the power of the Holy Spirit and His role in our sanctification.

This blog post was adapted from the Unleashed Bible study by Eric Mason and published by Lifeway. 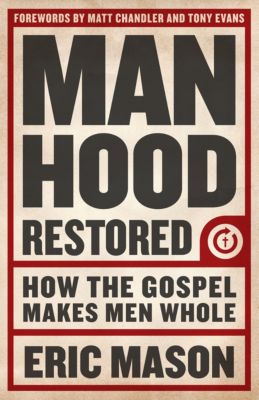 Manhood Restored by exciting new pastoral voice Eric Mason combines theological depth with practical insights, putting men in step with a gospel-centered manhood that will enrich every facet of their lives.

Eric Mason is the co-founder and lead pastor of Epiphany Fellowship in Philadelphia. He is known for articulating and proclaiming the gospel with clarity, passion, and authority at churches and conferences nationally. In addition to his role at Epiphany Fellowship, Eric serves as the president of Thriving, a ministry dedicated to aiding ethnic minorities to be resourced and trained for ministry to the urban context. Dr. Mason received his Master of Theology from Dallas Theological Seminary as well as a Doctorate degree (Ministry in Complex Urban Settings) from Gordon-Conwell Theological Seminary.