And now, dear brothers and sisters, we want you to know
what will happen to the believers who have died so you
will not grieve like people who have no hope.

If you’ve been a Christian for any length of time and lost a loved one, there’s a good chance you’re familiar with this passage. And it’s true, because of our hope in Christ, believers grieve differently than those without hope. The promises of God and our future in heaven have a direct impact on the way we anticipate the future. But here’s something you need to know: hurting with hope still hurts. The sting of death might have been removed, but it still stings. It hurts even when you know your loved one is in heaven. No, we might not grieve as those who have no hope, but that doesn’t mean we won’t be sad.

We do a disservice anytime we try to rush people through the process of grief, as though it were spiritual to put a happy face on a horrible thing. Masking pain doesn’t heal it any faster; it actually slows it down and stunts your rehabilitation. Sadness is an entirely appropriate emotion and a feeling Jesus demonstrated in the Bible.

Even if we have hope, it doesn’t mean we’re happy about our sorrow. But God isn’t happy about sorrow either. In fact, He’s furious. Not about our hope, but that we would need it. That’s why He warned Adam and Eve in the garden to avoid the forbidden fruit (Genesis 2:17). God knew that sin would trigger death. He never intended for us to struggle in the surf, with wave after wave of sadness crashing upon us. But in His goodness, He doesn’t leave us alone in our sorrow. When Jesus’ friends were grieving He went to them and comforted them.

We see how Jesus really feels about grief and death in John 11. Jesus wept at Lazarus’s death. He didn’t attempt to hide His emotion or disguise His sadness. He didn’t say, “It’s OK! Lazarus has gone to a better place, everybody. He’s probably playing football in my Father’s house.” No, Jesus cried. He cried because He hates death more than we do. He cried because Mary and Martha were suffering. And He cried because the world isn’t yet how it should be. Ask yourself: How can Jesus’ tears inform your views about grieving? Does the image of Jesus weeping bring you comfort or make you uncomfortable?

The thought of Jesus weeping is shocking, but even more shocking is what came next. The Bible says that Jesus groaned in His spirit (v. 33). This was no ordinary sigh. The Greek word used here means “to bellow with rage.” It’s a word that’s so strong it’s normally used to describe the angry snorting of an agitated horse. So much for gentle Jesus, meek and mild. He was fuming. Absolutely outraged. Mad at death. Mad at the grave, at sin, at the devil. But He wasn’t just angry—He was angry enough to do something about it.

But some of them said, “Couldn’t he who opened the blind man’s eyes also have kept this man from dying?” Then Jesus, deeply moved again, came to the tomb. It was a cave, and a stone was lying against it. “Remove the stone,” Jesus said. Martha, the dead man’s sister, told him, “Lord, there is already a stench because he has been dead four days.” Jesus said to her, “Didn’t I tell you that if you believed you would see the glory of God?” So they removed the stone. Then Jesus raised his eyes and said, “Father, I thank you that you heard me.”

Ask yourself: Why is it appropriate for us to hate death? Do you ever think that because God allows death and suffering He must be okay with it? How would it change things if you were mindful that God hates suffering more than anyone?

To be sure, Jesus raising Lazarus from the dead was an impressive act of power, but that wasn’t Jesus’ endgame. Remember, Lazarus would have to die all over again. Any physical miracle is just a delaying of the inevitable. Jesus was always focused on the spiritual miracle because that would last forever. So what did Jesus do after raising Lazarus from the dead? He went on to defeat death in the most unlikely way ever—by dying.

Inasmuch then as the children have partaken of flesh and blood, He Himself likewise shared in the same, that through death He might destroy him who had the power of death, that is, the devil, and release those who through fear of death were all their lifetime subject to bondage.

Jesus didn’t simply die. Anyone can do that. Wait long enough, and it will happen to you. Jesus didn’t just die—He rose from the dead. His soul reentered His decaying body, and He got up! Unbelievably, He offers this same casket-exploding power to anyone who believes. This is the gospel—Jesus died to destroy death and release those who believe in Him from the fear and power of death. Christians grieve with hope because in the end, they have a Savior who will wipe every tear from their eyes (Revelation 21:4).

Understanding that Jesus triumphed over death changes the way we live in the here and now. Hurting with hope doesn’t mean we don’t get sad, but hope changes things. It influences our suffering and sorrows.

This content has been excerpted and partially adapted from Levi Lusko’s Through the Eyes of a Lion Bible study. 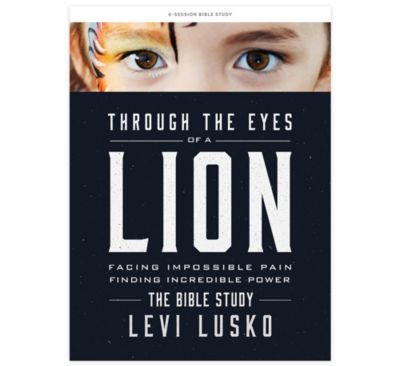 Through the Eyes of a Lion

In Through the Eyes of a Lion, Pastor Levi Lusko shares the eye-opening truth of the power of hope in a world that is often filled with pain, suffering, and loss.

Levi Lusko is the founder and lead pastor of Fresh Life Church, located in Montana, Wyoming, Oregon, and Utah. He is the best-selling author of "Through the Eyes of a Lion," "Swipe Right," and "I Declare War." Levi also travels the world speaking about Jesus. He and his wife, Jennie, have one son, Lennox, and four daughters: Alivia, Daisy, Clover, and Lenya, who is in heaven.