In the Gospels, Jesus often stopped what He was doing to minister to a single person. In this video, author and speaker, Karen Ehman, explains how often ministry is more than the big exciting moments, but it’s made up of the small moments caring for the person standing right in front of you.

I love reading the Bible—all of the Bible! The Old Testament and the New Testament. I’ve even tried a couple of those “Read Through the Bible in a Year” plans. Which for me, kind of ended up being start out straight out of the shoot in an exciting manner in January and then fizzle by February plans.

But, even though I love the entire Bible, I would perfectly happy to just sit and soak in the Gospels and look at the things that Jesus said and did when He was among us. I never tire of reading the accounts of how He interacted with people.

He was a very big God on a very big mission, but He was never too busy to just stop and pay attention to the person that needed Him. He could be in a crowd of thousands and somehow He would stop and give a word or a touch to a single soul. Because, you see, Jesus wasn’t about doing big things, He was about doing the right thing. And often the right thing was just stopping to notice that person.

We see this happen in Mark 5. Now, I’ve got to kind of set up the situation for you. He had just healed a demon-possessed man. I’m sure that was a grand thing. It was probably trending on Twitter. And then He and His disciples got in the boat and crossed to the other side of the lake. And it says this in Mark 5:21.

“When Jesus had again crossed over by boat to the other side of the lake, a large crowd gathered around Him while He was by the lake. Then one of the synagogue leaders named Jairus came and when he saw Jesus he fell at His feet. He pleaded earnestly with Him, ‘My little daughter is dying. Please come and put Your hands on hers so that she will be healed and live.‘” (Mark 5:21-23)

Verse 24: “So Jesus went with him.” I just love those five words. He didn’t draw a lot of attention to Himself. You know, He didn’t upload a picture of it with a cool filter on social media and say, “#MiracleOnTheWay”. No, He just simply stopped and went with him. Who in our life might need us to just stop what we’re doing and go with them in their pain?

Then someone else enters the story.

“A large crowd followed and pressed around Him. And a woman was there who had been subject to bleeding for twelve years. She had suffered a great deal under the care of many doctors and had spent all that she had. Yet instead of growing better, she grew worse. When she heard about Jesus she came up behind Him in the crowd and touched His cloak because she thought, ‘If I just touch His clothes, I will be healed.’ Immediately her bleeding stopped and she felt in her body that she had been freed from her suffering.” (Mark 5:25-29)

This story of Jesus and this woman never ceases to amaze me. We’re told Jairus’ name and his title, but this woman, she has no title. We don’t even know her name, yet Jesus stopped and He met her need.

I once heard it said that, for Jesus, real ministry was not the big thing He was about to go do, it was the person He found standing right in front of Him.

So who is that for you today? Is it a child asking you for a snack for the tenth time that day? Is it that coworker who’s going through something and keeps kind of stopping by your desk wanting to talk? Is it a neighbor? Who is it? Who do you find standing right in front of you today?

Live alert. Let that ministry come to you. It’s not always the big, grand things we’re going to do at church or at work or in our communities—although those things are so important. Often we need to stop and remind ourselves that real ministry is the person we find standing right in front of us. 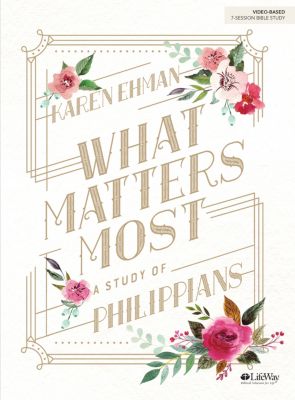 Over 7 sessions, study the ever-relevant Letter of Philippians to deepen your relationship with Jesus, turn your worries into worship, and develop gospel-centered tools for navigating relational conflict and thriving in Christian love.

Karen Ehman is a Proverbs 31 Ministries speaker and New York Times bestselling author. She has authored thirteen books including Listen, Love, Repeat:Other-centered Living in a Self-Centered World and the New York Times bestseller Keep It Shut: What to Say, How to Say It and When to Say Nothing at All. She also just released a Bible study with Lifeway on the letter of Philippians called What Matters Most.