Now how has [Rahab] come down to us through history? She’s a woman and a Canaanite and a prostitute. She would have been a social outcast even among her own people.

Here’s the way that she’s often referred to in commentaries. I’m not going to name the names of the commentators, but can I just be honest with you? Male commentators can be super hard on female Bible characters. Abraham can take his wife over to Pharaoh’s house and leave her there for several weeks twice basically. Abimelech and Pharaoh. And we’re like, “But you know what? It’s cool.” And then the women, it’s like, “Mmm. No. You know why she’s a prostitute? Because she wanted to be one.”

So let’s take a look. Let’s see what some of these guys had to say.

One of my favorite commentators refers to her as a “shady lady”.

Matthew Henry, we can give his name out cause he’s long dead. And this does not mean these men are terrible commentators, it’s just a sampling for you. I said I wasn’t gonna say their names, I lied. He’s describing her taking them up on the roof and hiding them under the stocks of flax and he says, “By these stocks of flax it appears that she had at least one of the good characters of the virtuous woman. However, in others of them, she might be deficient. That she sought wool and flax and wrought willingly with her hands. From this instance of her honest industry, one would hope that whatever she had been formally, she was not now a harlot.”

Another well-known commentator, I will not say his name, he says, “We may be appalled at the fact that Rahab was a prostitute or that she was a liar, but the fact is that she was not saved by her works, but by her faith.” Now, don’t miss that we’re supposed to be appalled

And then this is from a book called All The Women of the Bible by a man whose name I very much want to tell you, because I’ve since read other things he said about other women of the Bible. He says this about Rahab: “Like many a young girl today, perhaps she found the restrictions of her respectable home too irksome. She wanted a freer life, a life of thrill and excitement away from the drab monotony of the home giving her birth and protection. So high-spirited and independent, she left her parents, set up her own apartment with dire consequences.” Yeah, right, Herbert. (audience laughs)

Because you know what every little girl says? “When I grow up, I just want to be a prostitute.”

History has judged Rahab as a liar and a whore. Is that how we should read her?

I think we’ve grown in our understanding of things. If you were to google the name Rahab right now, do you know what would come up for you? A list of non-profit organizations. And what do you think that they’re involved in? Freeing women from human trafficking.

How do you think a woman gets to be a prostitute in ancient Canaan? I mean, it could be that she chose the profession, but I’ve heard precious few stories in my entire life that would indicate that a woman chooses that, free of any power dynamic, free of anything societal that’s going on. And in fact, we even know from history that it was a common practice in Canaan and other ancient cultures, that when a family could not pay a debt they often had to sell a daughter. It seem far more likely to me that find Rahab in the state that we find her in, not because she wanted to be a prostitute, but because that is where life forced her to be.

We should not be surprised to find a story of redemption, although it is perhaps a little bit of different story than we may have thought it to be because God is always most pleased to work through the last and the least. She is perhaps the perfect person to illustrate that in the kingdom of Heaven, the last shall be first. 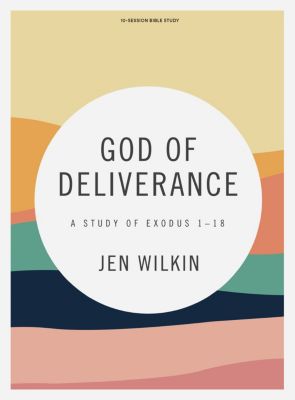 In this 10-session verse-by-verse study of Exodus 1–18, Jen Wilkin shows us that Israel’s story is our story: the same God who delivered Israel also delivers all those He loves from slavery to sin and from service to the pharaohs of this world.

Jen Wilkin is a wife, mom to four, and an advocate for women to love God with their minds through the faithful study of His Word. She is a speaker, writer, and Bible teacher. Jen lives in Flower Mound, Texas, and her family calls The Village Church home. Jen’s newest study is God of Creation. She is also the author of Women of the Word, None Like Him, In His Image, Sermon on the Mount Bible study, and 1 Peter: A Living Hope in Christ Bible study.