Each summer my parents hosted a two-week long “Camp Shiloh” for the whole gaggle of their grandkids. While I harbor complicated and painful memories of my youth in Florida, my kids have nothing but affection for the place. My dad taught them how to skin catfish, my mom taught them how to do crafts. They went foraging for blueberries and sang camp songs. My dad let them hang around his woodshop while he repaired old chairs or lathed pens from fallen pecan limbs. The kids fed sheep and ran in terror from angry geese. They got to know every corner of those six acres, from Elderberry Holler to Goose Grove to the Hobbit Hole under the pecan tree stump, and they grew up unsurprised by the notion that a property would have a name exhumed from the deep earth of the Old Testament. That place is a wonderland for kids, and I’ve jokingly (and lovingly) referred to it as a sort of backwoods Disney World.

But what about the trees? I’m glad you asked. There are the pecan, cypress, and pine trees, the lemon tree right outside the kitchen window, and the clementine I gave them when I couldn’t get it to flourish in a pot at my house. There’s a dark, quiet magnolia, standing like a nun in prayer, in the back garden next to the kumquat, and a number of showy crape myrtles, and along the picket fence there’s a bouquet of blushing azaleas. An arbor my brother built supports the most effusive tangle of wisteria you can imagine.

But wait, there’s more. I haven’t told you about the trees my parents planted for the grandkids. I may have mowed down Aedan’s red oak at the Warren, but my parents saved the day by planting him a live oak at Shiloh. Asher got an ash tree, of course, grown from a seedling from George Washington Carver’s own ash. Skye got her very own magnolia. My nephew Isaac’s tree is an American sycamore from a seedling at Gettysburg. His brother Elijah got a Shumard oak. My nieces Elizabeth, Hannah, and Lydia, got a Satsuma orange, an olive, and a mimosa, respectively. Because it’s Florida, and because my green-thumbed parents planted them, those trees will grow deep and tall and broad for decades, if not centuries, meaningful in a way the rest of the trees are not, purely because of the story of their planting and the children for whom they were planted.

But who will be there to tell it? It grieves me to know that whoever ends up with those six acres fifty years from now will most likely tear down the house and uproot the trees to make room for (the tragedy!) a new and forgettable subdivision or (the horror!) a convenience store. It’s unfathomable to me that anyone on earth will care for it the way they have.

Shiloh was lovely when my parents acquired it, but in the last two decades the structure and the grounds have been tended and kept by a Son of Adam and a Daughter of Eve who have given themselves to its renewal and flourishing. Everywhere you go, there are signs of my children’s presence, in their very own trees, yes, but also in the flower garden where rest the little round concrete pavers in which their pudgy handprints are forever sealed, or in the treehouse my folks built them, anchored by an old pecan. I didn’t grow up there, but in a very real sense my children did. My parents did, too.

The little boy and girl living deep in the bones of my parents came alive there as they cut trails through the pine woods, named the fields and painted those names onto weathered slats affixed to fenceposts, arranged perennials around the old wells, and strung up the zip line. It’s like they were still playing house even as their hair grayed and their joints stiffened. Who they have become is intimately connected to the land they have loved into its own becoming. And now they’re old, in their seventies and certainly wondering often what will become of this home they’ve made. Their children all moved away—to Nashville, Louisville, and Atlanta—and no one’s in a position to drop everything and pick up where Mom and Dad left off. But that doesn’t stop them. The lushness of the place is fleeting, and all the more precious for it. How marvelous it is to work to sustain the beauty of something even when you suspect, with good reason, that its beauty will fade as soon as you take your hand from the plough. But there’s good reason to believe our delights will delight those who come after.

By a stroke of good fortune, while I was working on this book a family member posted my dad’s mom’s 2001 obituary on Facebook. Granny Peterson lived in Lake City, Florida, just a few miles up the road from Lake Butler, and though I knew her pretty well I had no idea she also had an affinity for trees. The obituary read, “As a member of the Garden Club, Peterson worked tirelessly on beautification and preservation efforts for the city. When Duval street was being widened, she fought to save 75 old-growth trees. Although she lost the battle, she was able to save many of the old azaleas that lined the street, moving more than 100 to other parts of the city [and] organized tree plantings at schools around the county. The efforts of Bea Peterson’s work . . . are seen throughout Lake City each spring as the camelias and azaleas bloom along the streets and in public parks around town.”

My dad, it turns out, watched his mother advocate for trees, and I in turn watched him and my mother transform Shiloh into a garden—a garden where my own children played under their very own arbors. My children watched me dig holes and place the saplings in the earth. They helped me mulch them and saw me admire them as they grew. I think Granny would be pleased. She may not have saved the old growth trees on Duval Street, but she’s responsible in ways I didn’t even realize for the linden tree I planted in the wildflower meadow two years ago. Our loves are handed down quietly.

With each visit to Shiloh I’m confronted with two realities: the Garden and the Fall. Shiloh, to me, is the best of what can happen when humans root themselves to a place. Not only does the place grow better, the humans do, too. When I wander the property, Eden’s voice rises from a whisper to a song, and it’s easier to see what we were meant for: to love the world as God does, shaping it to reflect what was in the beginning, and, in even greater glory, what will be in the end. But the knowledge that the memories that drape the limbs like Spanish moss will be lost to time, forgotten like native songs, overgrown with weeds or wrecked by the willful ignorance of progress, fills me with a terrible grief.

“In some sense we’re all living in a parsonage, longing for a true home.”

What will become of my mother’s gardens, where her hands—hands that carry the DNA of that Protestant Frenchman, Hyeronimus Glück—plunge into the dirt to plant hydrangeas? What will become of my father’s woodshop, where with a pipe between his teeth he happily turns candlesticks on the lathe? When my children are old, will they take their grandchildren to Shiloh to eat the fruit of the trees my parents put in the ground? It’s possible, I suppose, but I doubt it. Someone else will buy the place. We’ll lose our connection to it. The great sadness of Time will bulldoze it beyond recollection.

And here is where faith strides into the scene, clothed with vitality, to remind us of the hope it plants and the love it grows. I have faith that there is a resurrection coming, and our present sufferings are nothing to the glory that will be revealed in us. If our stories are a part of us, then it follows that they too will be resurrected.  I don’t know if some redeemed Shiloh will occupy that little corner of Florida, but I believe this: in some sense we’re all living in a parsonage, longing for a true home. And in the same way Art and Janis Peterson grew younger as they poured their love into Shiloh and fashioned a garden, we priests of the New Creation will be clothed immortal to reign over our own gardens, and we’ll do it without the specter of Death hovering over it all, taunting us with the sorrow of Time and the lie of futility. Glory be to God, Time itself will be redeemed, because it will no longer be an adversary, but a friend, an everlasting Sabbath, an unending feast.

If my mom and dad made Shiloh new in thirty years, think what they’ll do with a million.

This post was adapted from Andrew Peterson’s new book, The God of the Garden. 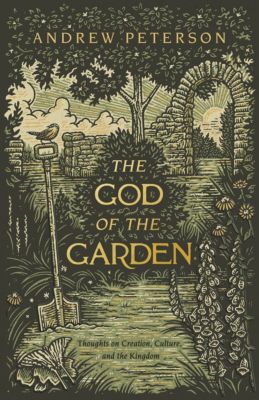 The God of the Garden

One of the first commands to Adam and Eve was to “work and keep” the garden. Award-winning author and songwriter Andrew Peterson, being as honest as possible, shares a story of childhood, grief, redemption, and peace, by walking through a forest of memories.

Recording artist, songwriter, producer, filmmaker, publisher and award-winning author of The Wingfeather Saga as well as his most recent release, Adorning the Dark, Andrew Peterson is also founder and president of The Rabbit Room, which has published thirty books to date and fosters community and spiritual formation through music, story and art.