Everyone walks through times of doubt, but oftentimes, God can use our times of doubting to strengthen out faith. In this video, author Barnabas Piper breaks down how doubt can coexist with faith and even grow our faith in Christ.

I think we often juxtapose doubt and faith as, not just opposites, but almost as enemies to one another. But I have found that the periods of doubt in my life have actually played a significant role in the strengthening of my faith. I think that’s true for anybody who walks through doubt with the intent of drawing closer to God.

So rather than doubt being an excuse to stiff-arm God or reject God, it is a time of not knowing. It’s a time when there’s a lack of clarity. It’s a time when it’s a struggle to recognize that God is Who He says He is.

There’s the famous prayer from Mark 9 where the father comes to Jesus with the demon possessed son and wants his son healed, wants his demon cast out. And Jesus says, “I can if you believe.” And the father says, “I believe; help my unbelief.”

I think that’s the prayer of the doubting person. Because if you’re able to acknowledge God at all, if you’re able to pray at all, there’s already belief there. There’s a seed of belief. So your doubts are not defining you. They’re not the hundred percent thing about you. They can be overpowering and overwhelming, but you still have that “I believe” part of “I believe; help my unbelief.” And then “help my unbelief” is the prayer that you take with you through the entire experience of doubt.

It’s not gonna be easy. And so this isn’t to paint a picture of you go into doubt and you come out and everything is perfect. Because for a lot of people, doubt is a lifelong thing. Or it’s roller coaster where it’s just constant ups and downs. And that’s life. That is our life for the duration until we meet Jesus.

But every time you walk through it in faith, every time you walk through it with that little seed of “I believe” and that loud prayer of “help my unbelief”, you come out on the other side in a place where you are closer to God, have greater awareness of God and a greater relationship with Christ. And I don’t use that in sort of the cliché, Christian way, but a genuine relationship where you recognize Christ as a person, Christ as an advocate, Christ as a savior, Christ as somebody Who you can look to on a day to day basis.

And so, those periods of doubt are inevitable because we’re finite, because we struggle, because there are things we don’t understand. But they’re also beneficial if you can pray that prayer, “I believe; help my unbelief”, throughout them. 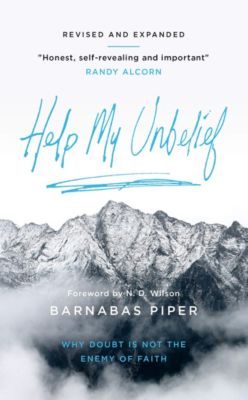 In Help My Unbelief, Barnabas Piper unpacks what faith really means. He shows how embracing doubts and questions can help us to get to know God better, and he encourages us to trust God in our everyday lives, even when we don’t understand everything about him.

Barnabas Piper is an author, writer, podcaster, and speaker. He has authored three books: The Pastor's Kid: Finding Your Own Faith and Identity, Help My Unbelief: Why Doubt Is Not the Enemy of Faith, and The Curious Christian: How Discovering Wonder Enriches Every Part of Life. He also co-hosts The Happy Rant podcast, a popular show discussing issues of faith and culture in a light-hearted, humorous manner.