As a kid, my husband loved to fish. I once asked him what happens when two fishing lines get entangled. He told me that even though the two lines eventually could be disentangled, it sometimes took so much effort that it was better to just cut the line, tie on a new hook, and start over. He also told me that even one line could get tangled up with itself.

Sometimes our lives are like fishing lines—easily entangled in a myriad of false ideas and worthless activities, leading us to exertion that demands our time and effort. And too often our struggle against falsehood can consume us and take us deeper into the entanglement.

The prophet Elijah demonstrated the stark contrast between the demand placed on our lives by pursuing false idols and the resources God provides for us to pursue our relationship with Him. In the end, one pursuit leaves us bled out and used up; the other pursuit builds us back up and ministers to us so we can minister to others.

As a young Christian, when I first read the story of the contest between Elijah and the prophets of Baal, I thought, The Israelites must have been shallow to have fallen so easily into worship of Baal, a pagan god! Modern Christians, who have thousands of years of Jewish and Christian writings at their fingertips, are so much better educated and informed. We’d never fall into such a trap! Now I realize that people today are not that different from people thousands of years ago, especially when it comes to human disloyalty to God.

“How long will you hesitate between two opinions?” Elijah asked. The Israelites, the people who should have adamantly opposed giving their loyalty to false gods, gave no answer. Their lack of response revealed their unfaithful hearts and minds. Beginning with King Solomon’s allowance of foreign religious and cultural influences and all the way down to the kingship of Ahab, the Israelite people had gradually strayed from the worship of God.

Under King Ahab, the spiritual drought was so dire that his pagan consort, Queen Jezebel, actively and openly persecuted the prophets of God. The persecution of God’s prophets came from the governing house of the Northern Kingdom of Israel! It is no wonder that God allowed the land to suffer a physical drought reflective of Israel’s great spiritual disloyalty (1 Kings 17:1).

The people had strayed so far from the worship of the true God that King Ahab actually blamed Elijah as the troubler or destroyer of their nation! Elijah, in unwavering loyalty to God, would not bow down to but openly opposed the worship of the pagan storm/fertility god Baal. And so, Elijah was blamed for attracting Baal’s wrath. Ahab—the leader of the nation that was explicitly told to have “no other gods”—had gone so far astray that he could no longer recognize the problem of “having another god.”

Even today, people may blame Christians for any number of problems in society. But just as we see with Elijah, the real problem is our society’s spiritual disloyalty, which ultimately leads to spiritual drought and destruction. We constantly look for peace and love and grace of our own design and in our own power. Yet no matter how strong our belief, we cannot hope to find an answer in the worship of things of our own design. Only the true God, full of grace and power, provides the answer we seek.

Elijah stated in his challenge that the true God is the One who answers. Here we find an important reason why God deserves our loyalty in worship, even when our society adamantly opposes us. God not only demonstrated His ultimate power but also His ultimate grace by providing Israel a chance to turn back to Him. Yahweh is deserving of loyalty as the true God of grace and power.

Notice the effort put forth by the prophets of Baal to provoke their god to action: shouting, cutting themselves with spears and knives until covered in blood, dancing, and raving, crying out, “Baal, answer us!” Note how much time and effort the false god took from the human worshipers.

False idols use up our time and energy and deplete us, often demanding much of our physical and spiritual resources. The true God is the One who builds us back up and ministers to us so that we have the potential to be effective witnesses to the power and grace of God. “We love because He first loved us” (1 John 4:19). God invests in us so that we can invest in others.

“It is no easy task to untangle ourselves from the deceptive falsehoods we encounter daily.”

The prophets of Baal brought ritual, tradition, ceremony, and religion into the call to Baal. Elijah brought trust when calling upon Yahweh. The prophets of Baal demonstrated their belief that the people must be for their god. However, Elijah showed that the God of glory is for us. What a vast difference between the two views! God wants us to be free to live in relationship with Him, free from the mindset that we must bleed out our lives in servitude to false gods, traditions, rituals, idols, and the worship of created things. It is the true God who gives humans true life.

Elijah began by repairing the dilapidated altar to the Lord. In this place where humans had once glorified God, an altar to a false god had supplanted the altar of the living Lord. Doesn’t this passage reveal a great truth in the lives of God’s followers? When we neglect to give God our trust and neglect glorifying Him, we erect other “altars” on which we sacrifice our lives.

In the contest between Elijah and prophets of Baal, Elijah left no room for those prophets to continue misleading the people of God. He had so much water poured over the sacrifice that there was no way for the sacrifice to burn naturally. He left no excuse to exchange truth for a falsehood; no physical evidence for God’s glory to be denied.

With no flashy dancing, no wailing or shouting, no self-mutilation, no extravagant religious routines or exertion, Elijah called upon God to show Himself as the true God. Elijah’s prayer was for God to receive the honor and glory of this redemptive act. The people, upon seeing God’s swift and powerful response, fell to the ground in repentance proclaiming that Yahweh is God.

No matter where we are in life, one thing is clear from this passage—God is for us. In this battle between truth and falsehood, we see that the falsehood enslaves us and bleeds out our lives. However, the truth frees us and gives back to us life itself. The prophets of Baal cut themselves and bled to gain the attention of their god. The true God of the universe, however, bled and died for His creation (Rom. 5:6-8).

It is no easy task to untangle ourselves from the deceptive falsehoods we encounter daily. Sometimes we are already so bled out that we feel as though we have nothing left to offer. So let’s ask God to reveal to us where we have sacrificed ourselves to the things of the world (or perhaps even just one area), and offer those things up to God, trusting in Him to redeem us even now.

And let’s go one step further, asking the Lord to show us how these things have possibly kept us from God’s mission of turning others’ hearts back to Him. May we find the redemptive power of God just as alive and full of grace as did the Israelites that day on Mount Carmel.

This blog post is adapted from The Gospel Project, which you can learn more about here.

Want to see more from Mary Jo? Check out her other Lifeway Voices posts: 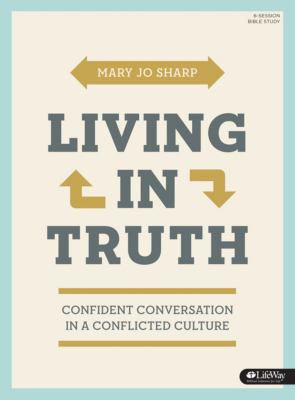 False ideas within the body of Christ and the influence of culture crack our foundation of faith. Many women need to go back to the basis of their beliefs and strengthen confidence in their beliefs and in God.

A former atheist from the Pacific Northwest who thought religion was for the weak-minded, Mary Jo is now a Christian author and apologist. She holds a Masters in Christian Apologetics from Biola University and is the first woman to become a Certified Apologetics Instructor through the North American Mission Board of the Southern Baptist Convention. A clear communicator with a teacher's heart, she finds great joy in discussing the deep truths of her Savior. She enjoys conversing with people of differing views, and has even engaged in formal debates with Muslims.