I am a single woman in my 20s, and I live with three of my friends who are all biological sisters. I do not have sisters of my own, but I have become the unofficial “fourth sister” in this family, and it is truly a joy to do life with them.

However, after living in a house with these sisters for more than a year, I recently read the story of Mary and Martha in Luke 10 with a different perspective.

I tried to imagine if 13 of our friends came into town for the weekend while they were passing through on a journey. Hosting any number of guests is extra work, but 13 people! I’m getting stressed just thinking about it. Feeding them, finding places for them to sleep, gathering enough pillows and blankets, and cleaning the bathrooms would be a huge undertaking.

Now, imagine if these 13 friends showed up on our doorstep, and my sisters sat on the couch listening to one of the friends talk, leaving me to do all of the housework by myself.

I would be irritated, to put it nicely. Seriously? There are tangible tasks that need to be completed and physical needs that must be met. If my sisters were ignoring the to-do list to sit down and listen to someone, I would definitely complain.

I would be Martha, who came to Jesus and asked, “Lord, don’t you care that my sister has left me to serve alone? So, tell her to give me a hand.”

I can easily see why Martha voiced this “it’s-not-fair” comparison prayer. How often do we feel that our intentions are right, our work ethic is strong, and yet, we see others who have more peace? Or a seemingly better reward?

Jesus’ response to Martha not only addressed her question, but it also reveals God’s response when we feel that our situation is unfair, especially compared to that of our peers.

First of all, Jesus responded to Martha with compassion. He said, “Martha, Martha,” repeating her name twice, ensuring that He saw her and knew her. Beyond that, He graciously acknowledged her pain before correcting her attitude. He said, “You are worried and upset about many things.”

We know Martha was distracted by her many tasks, but Jesus saw even deeper into her heart. We don’t know the specifics of the “many things” that troubled Martha’s spirit, but Jesus knew all that weighed on her. He recognized her burdens.

After addressing Martha with kindness, Jesus boldly spoke truth, even when it wasn’t what she wanted to hear. I’m sure Martha was hoping Jesus would say something to the effect of, “Martha, you are so right, and Mary is wrong. How rude of her to leave you with all of the work! Thank you for making the better choice.”

“A key part of prayer is submitting to God and walking in obedience.”

Instead, Jesus said, “you are worried and upset about many things, but one thing is necessary. Mary has made the right choice, and it will not be taken away from her.”

When we ask God questions, He will give us honest answers, even if it’s not what we want or expect to hear. A key part of prayer is submitting to God and walking in obedience. We have to trust His way is best, even when—or especially when—we don’t understand.

Accepting truth may feel uncomfortable at first, but it will ultimately bring far greater peace and contentment than whatever lie we were holding on to. Eventually, I bet Martha was grateful Jesus pointed her to the truth instead of letting her wallow in bitterness. While it was not the response she had hoped for, it was the answer that would bring healing and wholeness.

JESUS POINTS US TO WHAT MATTERS

You could say housework was the source of conflict between Mary and Martha, and on the surface, that’s correct. However, as was often the case, Jesus saw beyond the temporary situation and pointed out the deeper spiritual implications of what was happening.

For Martha, the real problem wasn’t housework, but misplaced priorities. Her frustration came from the fact that she was more focused on resolving her own troubles than learning from Jesus.

Mary chose to spend her time sitting humbly at Jesus’ feet and listening to His words, which was of lasting significance. Even if Martha cleaned the house perfectly, cooked the most delicious meal, and became known as the best host around, her reward would be temporary. Her worries and her work were trivial when compared to the eternal significance of spending time with Jesus and soaking in His teaching.

Think about the last time you said, “It’s not fair,” or became jealous of someone you felt didn’t deserve their reward.

Did you bring this frustration to God? Bring your concerns to Him, knowing you can be honest and that He is a compassionate God. Be willing to accept His truth-filled answer, which will ultimately direct you toward hope and healing. Ask Him to give you an eternal perspective and show you what matters to His kingdom.

Lastly, choose to sit at His feet, humbly listening to His words, trusting that He is the best teacher and friend we will ever have. 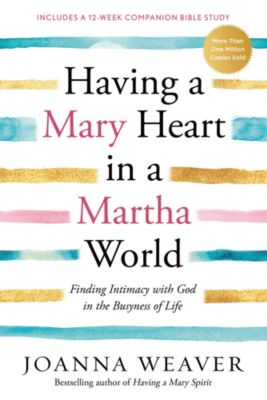 Having a Mary Heart in a Martha World

With her fresh approach to the familiar Bible story and its creative, practical strategies, Joanna shows how all of us, Marys and Marthas alike, can draw closer to our Lord, deepening our devotion, strengthening our service, and doing both with less stress and greater joy.

Rachel Sinclair (@1RachelSinclair) is a freelance writer based in Franklin, Tennessee. Outside of work, she enjoys spending time with friends, playing the guitar, visiting local coffee shops, and performing in community theater. Read more articles and listen to her podcast at rachelsinclair.net.