If in need of some evidence proving the moral perfection of God, the law provides it. “As the holiness of the scripture demonstrates the divinity of its Author; so the holiness of the law doth the purity of the Lawgiver.”¹ Our relationship to the law isn’t worth celebrating 14 days into February. However, we learned about it whether through counsel or conscience, we responded by resisting all of the goodness it had to offer, proving something deep and dark about ourselves. Mainly that we don’t like to be like God. That’s not to say that our sinfulness isn’t a parody and a rather silly way of deifying ourselves. The serpent still incentivizes unbelief by promising that it will make us “like God,” but our motive has never been to be like God in terms of righteousness but of rights. We lust after ultimate authority, plant our flag in shallow soil, and claim ourselves, and others, as our property. It’s not until the law is put before us that in its mirror, we see that we haven’t become like God at all. We have only imaged Satan. This is because “. . . the law is holy, and the commandment is holy and righteous and good” (Romans 7:12). The law is holy because the Giver of it is and responding to it in complete obedience (if possible) would’ve reckoned us all good. Problem is, “No one is good but God” (Mark 10:18)—as in, no one is holy but God.

The ethical nature of God

The law tells us about the ethical nature of God if we look at it closely. Observing it like a curious child in its mother’s lap, the first five precepts of the decalogue (the Ten Commandments) reveal God’s worth. The inverse of the first tenant—to have no other gods but God—would be an idolatrous endorsement if it were reversed and reshaped to command Israel to “Have other gods before God.” If on Mount Sinai, God thundered those words, the calf covered in gold, built right after the smoke cleared, would’ve been an affront to God that God Himself provoked. That is to say that God would be a recommender of wickedness. And what is wickedness anyway if not the refusal to honor God as God? Commanding anything other than absolute allegiance to Himself would not only be an evil for which God would require atonement for but also the promotion of a lie. The lie being that other gods, made by hands or thoughts or whatever, could in fact be God, too. As if they created the heavens and the earth, as if before anything made that was made, they existed. As if they could deliver on their promises or save or justify or sanctify a sinner. But only a devil would tell such stories.

And so it stands that God could never command us away from worshiping Himself. “Can he ever abrogate the command of love to himself without showing some contempt of His own excellence and very being? Before he can enjoin a creature not to love Him, he must make Himself unworthy of love and worthy of hatred; this would be the highest unrighteousness, to order us to hate that which is only worthy of our highest affections.”²

If you squint your eyes a bit and place your hand on your chin while interrogating the second set of commands, in them you’ll discover more of what God is like. What He commands of Israel there, is what He is in Himself. Love is not God, but God is love, and so being, He is active in how He gives it away. Murder, theft, adultery, dishonesty, and covetousness are a set of behaviors and heart postures that don’t exist in God not merely because He is love but because He is holy. Holiness is what makes real love possible. Without it, love is purely sentimental, easily misplaced, and unconditionally conditional. Being morally perfect positions God’s love as a living thing that won’t and literally can’t dishonor creation, so imagine again, the reversal of the duty to love our neighbor. “Thou shall murder, steal, commit adultery, lie, and covet” would, if commanded by God, reveal Him as a terror. A hater of all that He’s made and One resolute on destroying and stripping all humans of their dignity. The half-hearted, self-centered, idol-prone love we model so well would be the ultimate ideal and the very definition of it, for there would be no moral standard beckoning us higher. God would be an instigator of hatred and our obedience to such an animalistic way of life would make earth as we know it hell as its always been.

What or should I say “who” I’ve described above sounds more like Satan than it does God, but who do you suppose we are imaging God as when His holiness is disregarded in our definitions of Him? God’s being is antithetical to every way the world functions (1 John 2:16). Both transcendentally and ethically. Peter and Isaiah’s experiences bear witness to this. In the same way, our natural repudiation of the law as it’s taught, read, preached, and sung to us in an unconverted state reveal our sinfulness (Romans 7:7). Our sinful nature is the very reason for a necessary “woe” in response to the presence of the Holy One. The law magnifies our darkness because its giver is light. It reveals our impurities because its giver is pure.

¹ Stephen Charnock, Discourses Upon the Existence and Attributes of God, Volumes 1-2, 128.

² Stephen Charnock, Discourses Upon the Existence and Attributes of God, Volumes 1-2, 180.

This post in an excerpt from Jackie Hill Perry’s new book, Holier Than Thou. 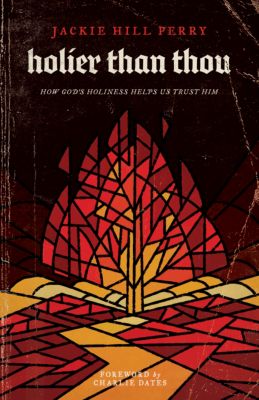