As Protestant Christian culture reflects on Reformation Day, President of Midwestern Baptist Theological Seminary, Dr. Jason K. Allen, reminds us what the Five Solas of Protestant belief are and why they are important.

Perhaps the central turning point of the Christian church in 2,000 years was the Protestant Reformation.

So much was wrong and deplorable about the Church in the middle and early part of the 16th century. By the time you come in to 1510, 1515 so many of these issues had really reached fever pitch. Errant theology, clerical abuse, taking advantage of God’s people through the selling of indulgences and so forth, and this deplorable understanding that the people were dirty. The laity were dirty and the clergy were clean and had access to God. And people had to go through them, and in particular through the giving of money to them, to have access to Christ and to the Father.

So what happened? Well things reached fever pitch in the early 16th century and the Protestant Reformation occurred. Martin Luther famously nailed his “95 Theses” to the door of the Wittenberg Chapel Church and so much began to happen. And year by year Europe and then beyond Europe was radically transformed.

At the heart of all that were certain core teachings that our authority was not in church councils, not in church teachings, certainly not in a pope, but in the Word of God itself. Sola Scriptura.

So then, doctrines begin to take shape and the church began to clarify and distill these in ways that are still with us today. What does it mean for one to embrace the Five Solas?

We’re saved by grace through faith in Christ by the Word of God alone for the glory of God alone.

The key word throughout is the word “alone”.

What does it mean to be saved by faith alone? Faith alone, not in of ourselves, not in works, not in good deeds, et cetera.

Grace alone. The pure mercy and goodness of God through Christ. We can’t earn it. It is indeed a gift.

In Christ alone. Salvation in no other name. We had one redeemer, the Lord Jesus Christ.

And all of this is rolled up in a way and presented in the Scriptures so that God alone gets the glory. If we earn our salvation, there’s glory sharing. If salvation’s a gift, there is no glory sharing. And so we say, glory to God alone. 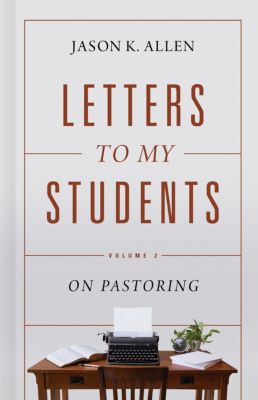 Letters to My Students, Volume 2

Letters to My Students is a biblical, accessible guide for ministers and ministers-in-training. It brings both biblical and practical wisdom to bear on the minister’s three main responsibilities: preaching, leading, and shepherding the flock of God.

Dr. Jason K. Allen serves as the fifth president of Midwestern Baptist Theological Seminary, in Kansas City, Mo., and is one of the youngest presidents in all of American higher education. In addition to his role as President, Dr. Allen serves the institution in the classroom, as a professor for preaching and pastoral ministry. More broadly, he serves the church through his preaching and writing ministries as well. He is the author of two recently-released books, The SBC & the 21st Century and Discerning Your Call to Ministry. Dr. Allen regularly posts essays on his website, jasonkallen.com, and hosts a weekly podcast, “Preaching & Preachers."