Reality dating shows. Can you believe that two decades have passed (give or take) since they first came on the scene? Christians tend to disagree when it comes to the ethics of these shows, or whether or not a believer should watch them. But there is one thing we all have in common: twenty years of neon-colored headlines assaulting our check-out experience at the grocery store, telling us how the couple fared once the show was over and real life began. Splitting up. Over already! Why he left her. She called it quits! Betrayed. Breakup confirmed!

Caricatures, Versions, and Breaking Up

Why do these relationships tend to find their way to Splitsville instead of the altar? Of many reasons, one is that the star of the show isn’t actually introduced to a real person—she is introduced to a glammed-up caricature of a person. Girl meets Boy, except Boy isn’t really who we think he is. All the layers of what makes him real and human and complicated get flattened down into a sort of cartoon or stereotype. This way, the cast can be rounded out with balanced representation of one-dimensional characters like “Good Guy” and “Bad Boy” and  “Jock” and “Adorkable[1] Nerd” and “Responsible Banker” and “Surfer Guy with an Epic Man-Bun” and so on.

So, instead of Girl meeting Actual Boy, she meets Man-Bun Boy.[2]

But what happens when Girl falls for Man-Bun Boy instead of Actual Boy in the show, and then discovers the two aren’t the same in real life? What happens when she finds out Man-Bun Boy was painted as someone he really isn’t, or was assigned a bunch of lines that he never really came up with, or was way more complicated than his cartoon let on? Well, headlines in the check-out line are what happens. We find that it didn’t work out.

And we all kind of knew it wouldn’t, right? Girl didn’t really know Actual Boy before now. She might have known America’s version of him, or maybe even the version of him she invented in her own head, but at some point, she was going to have to break up with the “versions” in order to get to know the real person.

True for Us, Too

The same problem that happened to Man-Bun Boy can happen to us in our everyday lives, can’t it? It’s the worst when someone wants you to be some stereotype, or perhaps some version of yourself that isn’t real. We all hate it when someone gets us wrong. We don’t want to be anyone’s cartoon or mascot or scape goat or puppet. We don’t want others to make us in their image, forcing us to adopt everything they believe or care about, squeezing us into some costume or mold, using us to prop up some agenda they have. In short, we all want to be rightly understood—to be taken on our own terms, painted as we actually are, quoted on what we actually said (or didn’t say), and interpreted as Actual Us.

Yet, I often find that we don’t give the same courtesy to Jesus. This can easily be seen in the “my Jesus” expression that has taken religious conversations by storm in America lately:

“My Jesus wouldn’t do that.”

“My Jesus doesn’t think that way.”

“My Jesus really cares about this or that.”

These phrases give me pause because they run the risk of creating a version of Jesus who is, as Tim Keller would say, “a god of your own making, and not a God with whom you can have a relationship and genuine interaction.”[3] In other words, “my Jesus” is not Actual Jesus. He’s just a version I construct according to my likeness, my interests, my passions, my agenda, my moment in history, my cultural norms, my values, my view on the world, and my line of thinking. And when I create that, in Keller’s words, I am ultimately “worshipping an idealized version of myself.”[4]

Christian or not, we can all do this to Jesus. We are all susceptible to cherry picking only the parts we like about Him, assigning motives or traits or words to Him that align with our values, or holding Him up as the mascot for our “team”—whether that’s our political team, our theological team, or otherwise.

This leaves us with a lot of different versions of Jesus, doesn’t it?

The empowering Jesus whose job it is to make all your dreams come true.

The death-to-self Jesus whose job it is to make your life miserable because that’s the only way to be godly.

The man-bun-millennial Jesus who loves quality coffee, artisan cafés, and a good cause.

With all these versions (and more) of Jesus to try on for size—Man-Bun Jesus being just one of many—it’s no wonder that American Christianity can feel like a dating show. And it’s also no wonder why religious headlines report that many of us are walking away from the relationship altogether. It seems like every time we turn around, we hear another Christian form of “Breakup confirmed!”[5] But that shouldn’t necessarily seem shocking, should it? Splitsville is always the destination when we’ve cast all our hopes on anyone other than Actual Jesus. A counterfeit or fabricated version of Him will always disappoint us, and we should walk away from it.

Here’s where the analogy breaks down in the best of ways. On a dating show, Girl usually finds that the difficult or immature Actual Boy didn’t live up to the idealized, camera-ready Man-Bun Boy. After the pixie dust wore off, Actual Boy wasn’t so perfect after all, and Man-Bun Boy was never real to begin with. So, Girl calls it quits on both of them. But in our case, Actual Jesus is a million times better than Man-Bun Jesus, which means we can break up with the latter without having to give up on the former. Actual Jesus really is perfect.

“A counterfeit or fabricated version of Jesus will always disappoint us, and we should walk away from it.”

So break up with the version that’s holding you back from Him.

Now, of course, yours might not have a man-bun. But you do have some form of “my Jesus” lurking around in your headspace. So do I. So do we all. And we all need the reminder that he’s not real. So who is your version? What form does he take?

Don’t let him lurk in the shadows anymore. Identify him, right now. Give him a name. And then give him the boot.

And once you do, go get to know Actual Jesus by following Him around in Scripture. Listen to what He says. Watch what He does. Observe how He responds to things. Implement His teachings. Let Him encourage you, challenge you, and surprise you. Let Him say what He wants to say and be who He wants to be, even in the places that feel very contrary to your preferences.

Open your Bible and take Him as He is. You won’t regret it.

[1] Yes, this is a real phrase used in modern culture, and I am a huge fan of it.

[2] No harm came to any male with a man-bun during the writing of this article. Indeed, I have no ill will against man-buns.

[3] The Reason for God, Timothy Keller.

[5] There are a lot of other reasons why people walk away from the Christian faith. This article simply narrows in on one of them. 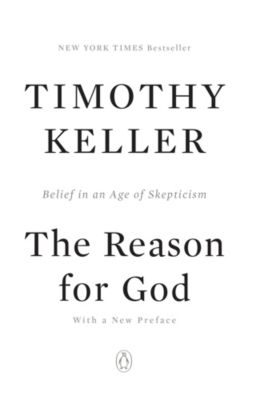 The Reason for God by Timothy Keller

Using literature, philosophy, real-life conversations, and potent reasoning, Keller’s The Reason for God explains how the belief in a Christian God is, in fact, a sound and rational one. To true believers he offers a solid platform on which to stand their ground against the backlash to religion created by the Age of Skepticism. And to skeptics, atheists, and agnostics, he provides a challenging argument for pursuing the reason for God.

Ashley Marivittori Gorman (MDiv) serves as an associate publisher at B&H Publishing Group, an imprint of Lifeway Christian Resources. She has been trained under The Charles Simeon Trust, and her passions are biblical literacy, discipleship, foster care, theology, and books. Ashley and her husband, Cole, live in Nashville with their daughter Charlie.