The story of Gideon in Judges 6 and 7 is a familiar one to ministry leaders, and it’s one we might do well to revisit during this challenging season of ministry.

Gideon was something of an unlikely war hero. When we meet him in Judges 6, he’s literally hiding from the Midianites, threshing wheat on the floor of a winepress so he won’t be seen and raided. That’s where the Angel of the Lord came to him with an unexpected greeting in Judges 6:12: “The Lord is with you, mighty warrior.” Gideon seemed surprised by this assessment of who he was, as we see in verse 15: “Pardon me,” Gideon replied, “but how can I save Israel? My clan is the weakest in Manasseh, and I am the least in my family.”

After some famous convincing involving two days of dew and a fleece, Gideon trusted God, made a battle plan, gathered 32,000 troops, and prepared to attack. At least that was Gideon’s “Plan A.”

Right about then, God made another unexpected statement, recorded for us in Judges 7:2: “You have too many troops for me to hand the Midianites over to them, or else Israel might elevate themselves over me and say, ‘I saved myself.’” So God proceeded to whittle down the troops. Twice. First from 32,000 to 10,000, and then to just 300. And then the battle plans changed. This battle would not be won with soldiers, swords, and shields. Nope. Each of the 300 men would instead go to battle with a trumpet, a torch, and a terra cotta pot. We’ll call this “Plan B.”

Gideon’s 300 men surrounded the Midianite camp, and on his signal, they broke the pots, revealing their torches, blew their trumpets, and shouted, “For the Lord, and for Gideon!” The Midianites were so frightened and confused, they fought against themselves. God used Gideon and 300 men to defeat them.

What does this have to do with your ministry in 2021? Like Gideon, most of us have had our Plan A taken away. We feel discouraged and distracted and defeated. Our churches aren’t meeting. Our volunteers are MIA. We feel like our soldiers, swords, shields, and strategies are gone. Some of us are doubting whether God has chosen the right person for the job. If this is how you feel, these five truths from Gideon’s life are for you. Listen closely, and apply them to your situation.

2020 (and now 2021) have been difficult for everyone in ministry. No, we can’t do it the way we have always done it, but we must continue to minister to people in whatever ways we can. Let’s not allow our ministries to be deterred or deferred. There’s urgency around the gospel. Ephesians 5:16 reminds us to make the most of the time we have. Second Timothy 4:2 challenges us to present the Word “in season and out of season.”

Not having Plan A is not a reason to concede the mission. When God took away Gideon’s soldiers, the goal was never to not have a battle, and it was never to not win the battle. The mission didn’t change, only the method. And God did what He did for good reason.

“Watch for the Lord to do something that only He can do, so the glory can only be given to Him.”

Time and time again in Scripture, we witness God doing miraculous things in unlikely ways. God rescued humanity from elimination by having a 500-year-old man build a boat in the desert. He saved baby Moses by having his mother float him down the river in a basket, and then had the daughter of the very king who decreed that all Israelite babies be killed, adopt him and raise him in the palace. God waited until Abram was 100 years old before he gave the promised son. He used a shepherd boy with a rock to kill a famous military champion (who also happened to be a giant). He had Elijah pour water over the altar, enough to fill a trench around it, before burning up the offering with fire from heaven to humiliate the prophets of Baal.

Jesus told the wedding caterers to fill the jugs with water. He told Peter to get a coin from the mouth of a fish. He healed a blind man with spit-mud. He defeated death by dying. When He left the tomb, He folded the cloth.

Don’t waste time worrying that God has taken away your meeting times or your volunteers or your most comfortable way of doing ministry. Don’t cry over soldiers and swords. Look for torches and trumpets. Watch for the Lord to do something only He can do, so the glory can only be given to Him.

Truth 3: It’s not your battle.

Do you see it? We may think of this as Gideon’s battle, but it wasn’t. It was God’s. It was always God’s. So is your ministry. Stop trying to carry the burden of a failed Plan A and the stress of an untested Plan B. Your church is His. Your people are His. Your job is His. It’s not about you. It’s all about Him! The battle belongs to the Lord.

Truth 4: God WILL accomplish His plan.

God is absolutely, 100% perfectly in control of every circumstance and situation you will ever face. History is His story. He is the author and finisher. He raises up kings and tears them down again. He is our strong tower. He is an ever-present help. He is Lord of all and over all. There is no one and nothing outside of His control. When God says something will be done, you can know it will absolutely, positively, 100% be done.

In Judges 6:16-23, God tells Gideon, “ I WILL be with you.” “You WILL strike Midian down as if it were one man.” “I WILL stay until you return.” And, “Don’t be afraid, for you WILL NOT die.” In Judges 7:7, the Lord said to Gideon, “I WILL deliver you with the three hundred men.” God has a purpose and a plan, and He will be faithful to complete His plan.

Ephesians 2:10 reminds us God created us for good works, “which God prepared ahead of time for us to do,” (emphasis mine) and Jeremiah 29:11 reminds us God knows the plans He has for us. When we understand God will work out His plan, it changes how we pray. Instead of asking God to be with us in our plans, let’s instead ask that He allow us to be with Him in His plans.

Truth 5: God wants leaders to walk in confidence by faith.

When the time came for the battle to occur, Gideon gave each of his 300 men their torches and their trumpets and their clay pots, and he gave them this instruction in Judges 7:17: “Watch me,” he said to them, “and do what I do.” In this moment, Gideon gave us a beautiful picture of biblical leadership. It’s not a “do as I say” strategy, but one built on leadership by example.

As leaders, we need to get our hearts and our heads right, and then invite people to watch us and do what we do, reminding ourselves and others that the mission hasn’t changed. God sometimes does big things in unlikely ways. This is not our battle to win or lose, and God will accomplish His will.

In the end, we’ll learn something profound: In God’s eyes, Plan B was Plan A all along. 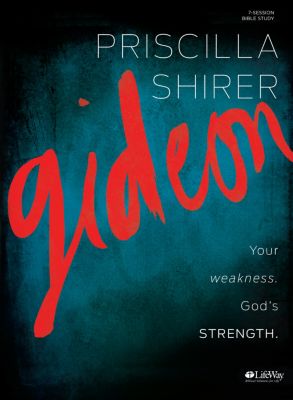 From a state of fear, weakness, and insecurity, Gideon emerged as Israel’s hero, filled with God’s presence and His passion for deliverance. This study will encourage you to recognize your weakness as the key that the Lord gives you to unlock the full experience of His strength in your life.

Chuck Peters is Director of Operations for Lifeway Kids. A graduate of Columbia Bible College, Chuck has served vocationally & voluntarily in Student and Children’s Ministry for many years.