Teenage girls today are facing different realities and different struggles than many women had to deal with whenever they were teenagers. In this video, Girls’ Ministry Specialist, Mary Margaret West, discusses how today’s teen girls can be ministered to and how leader and parents can better understand their unique challenges.

When I think about teenage girls today and everything that they’re facing, it’s complicated. They are facing all kinds of stuff that, even I as a teenager, now that I’m in my mid-thirties, I didn’t have to deal with as a teenager.

I don’t know if you’ve looked anytime recently, but anxiety is on the rise. Depression is on the rise. Girls are just dealing with some very difficult things at a very young age.

Our job at Lifeway Girls is to come alongside of them and to help you, as leaders, to know how to better do what you’re called to do, whether you’re a parent leading your kid at home. Maybe you’re a mom or dad or an aunt or an uncle that’s wanting to invest in the life of your daughter or your niece or maybe even your granddaughter. Or maybe you’re a small group leader, Sunday school teacher at church.

Just knowing that their challenges are different than they were for all of us growing up, I think the knowledge of that is a big piece of the puzzle. But just know that they’re facing stuff on social media that we weren’t connected that way when we were their age.

So rather than saying, “Hey, don’t spend time on social media.” or “Step away from that.” We want help engage that world and leverage it for the gospel. We want to help understand where it is that they’re coming from and what it is that they’re dealing with so that we can better minister to them and find out what their needs are and where the problem areas truly are.

If you love teenage girls like I do, I hope that you will just consider joining this conversation and being a part of the solution. Because when they’re talking about the things that they’re anxious about, we should stop and listen. It’s our job to be good hearers and conversation partners with them to find out really what is going on and what truly it looks like for them, as they’re navigating school and friendships and dating relationships.

Because I don’t know if you’re like me, but I didn’t have Instagram and I didn’t have to consider how many people were going to like my picture on social media and whether or not it was worthy of my friend’s attention. My attention was in other places.

We’ve just got to get where they are and all of that begins with relationships. Maybe that’s something you’ve been scared of, spending time with a teenager, because they can be a little awkward. Let’s just be honest. But if we’re willing to take time and step in with them and just really engage them and talk to them about Who Jesus is, some of that begins to change inside of them. We can help them to see where their value truly lies, where their hope truly is, and all of those things are rooted in the gospel.

I hope that as you are listening to this today that you’re encouraged to know that you have a role to play. Every single one of you is important in this journey of helping teenagers better know who they are in Christ and Whose they are and Who they belong to. So that when they go off to college, become young adults, they’re secure in those things. We can help them as they’re home and as they’re in our small groups on Sunday mornings as they navigate those situations in a way that honors the Lord.

Just know that it looks different for them than it did for us. But we’re just partnering alongside with them in the gospel. 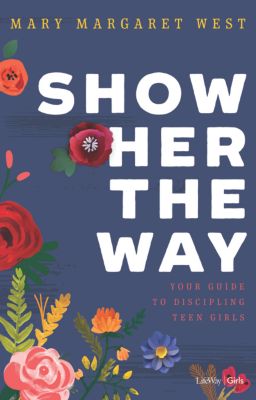 Show Her The Way

Today’s teen girls are facing more pressure than any generation before. We want so much to help them navigate the barrage of cultural messages coming at them every day and show them how to filter what they hear, see, and experience through the truth of God’s Word. But where do we start?

Mary Margaret serves as the Girls Ministry Specialist for Lifeway Christian Resources, which basically means that teenage girls and the women who lead them are her favorite people on the planet. She is the author of Show Her the Way: Your Guide to Discipling Teen Girls, is a former Girls Minister, and holds a master’s degree from New Orleans Baptist Theological Seminary. She also hosts Lifeway Women’s {MARKED} podcast and co-hosts the Lifeway Student Ministry Podcast. Mary Margaret is married to Jonathan and they love living in Franklin, TN.