We serve an incredibly creative God who has made us into creative people. But what do we do when we feel like we’re just not creative? In this video, women’s ministry specialist, Kelly King, gives four easy thing that you can implement in your own life to help you become more creative.

I love that the Bible begins with these words: “In the beginning, God created…“

I think it’s interesting that we sometimes don’t see ourselves as creative people, but we see that we were made by a God who is creative. And if we are image-bearers of God then He has really instilled that quality in all of us.

Now sometimes you may see yourself as a real creative person and maybe there’s other times that you think, “I’m just not creative.” But we’re all creative in different ways. So I want to give you a few tips on how to stay creative.

Surround Yourself With Creative People

There’s a lot of things that you can do personally. Number one is surround yourself with other people that you think are creative. I love learning from other people who just seem to think about different things in different ways. Hang out with them and learn from them. Invite them into the process of what you’re doing.

The other thing is that sometimes you have start somewhere. You have to start that process of going, “Okay, I really need to think of this in this way and how do I do it differently?”

Maybe that’s, for instance, you’re preparing a Bible study or a Sunday morning lesson. Because how many times have you gone to a class on Sunday morning or even in church and it’s the same thing in the same way week after week after week? Let’s force ourselves to think just a little differently and give ourselves some time to think, “How can I do that in a different way?”

Several weeks ago we were studying in Exodus and we were studying about how the Israelites had formed the golden calf. So what I did was I gave each of them a can of Playdough and I told them to form that Playdough into something that they really, really like spend a lot of time with or really liked.

So one of them came up with a taco because she loved tacos and one of them came up with a phone because she really likes her phone. Then it was really easy for me to tie in when we look at the story and how people formed this calf and it was something they worshipped. How we tend to have things in our lives that we worship. So that’s just something that you can take with you. Force yourself to do that.

Expose Yourself To New Concepts

Expose yourself to new concepts. Look at art. Look at music. Maybe there’s even some television shows. For instance, think about all the television shows on homes, on how to decorate your home, how to renovate your home, etc. Or even the cooking shows. I mean, we have a whole network of things just on how to be creative in the way that we cook. Expose yourselves to new concepts and incorporate that in the way that you plan to be a little more creative.

Another thing is if you’re stuck, if you’re in a kind of creative rut or you just feel like maybe you’re forced to deal with something or you’re working on a lesson, just go outside, take a walk, get some exercise. Clear your head for a little bit and allow the Lord to just give some new ideas. Ask Him for some new ideas. Spend time with Him and just say, “I need to see this in a fresh way.”

And I promise you that the people that you teach and the people you lead are going to be so thankful that you took the time to take some steps in being creative. 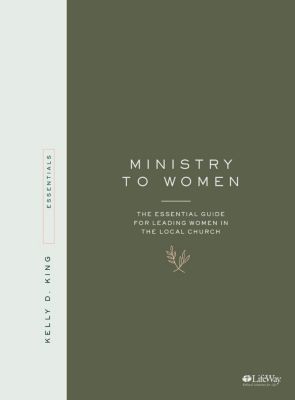 Women’s Ministry is dynamic and complex in our local church today. As pastors and women’s ministry leaders seek to lead well and adapt to changing times, it can be tough to know where to turn. Ministry to Women: The Essential Guide for Leading in the Local Church is, as the title intimates, a comprehensive guide to women’s ministry in the local church.

Kelly King is the Women’s Ministry Specialist for Lifeway Christian Resources where she coordinates training and equipping events for women in leadership. She has more than 30 years of leadership experience, both as a lay leader in the local church and in vocational ministry. Whether she has led a small group Bible study or organized an event, she believes women need to be led first by God before they can lead others.