Pornography is a multi-billion dollar industry and an everyday struggle for many Christians. In this video, author, professor, and speaker, D. Scott Hildreth, tells the story of how he ended up writing a book on the freeing yourself from bondage of pornography after realizing he shares a name with a pornographic author.

Pornography. Some would ask the question, why is a missions professor, an evangelism professor, talking about pornography? There are a couple of reasons. The first one is because I deal with young students all the time and this is a major struggle of guys and girls on our campus. But really the second reason is a story I need to tell you.

The Mission Field of Amazon

Several years ago I wrote a book with B&H Academic and it was a simple, little book that talked about how the Southern Baptist Convention cooperates together for missions (Together on God’s Mission) which is what a missions professor ought to do. But in the midst of publishing that book we became aware that I actually share a name. My name, Scott Hildreth, is also the name of a guy who also writes and publishes on Amazon, but he writes hardcore pornographic novels. Now, let me just warn you. Don’t Google his name please. I promise you, you don’t want to do that.

But when we found that out it was kind of a moment of panic. I thought, “What am I going to do? I don’t want to publish just one book in my whole life and I only have one name. Do I write under a pen name or create initials?” What’s the response when you find out that is going on? The other issue was I actually had my students who would look for my book to buy it and my parents would look at it. So I was like, this is crazy. What am I going to do about this problem?

It dawned on me one day as I was thinking about this and talking with some people. You know, if people find his books when they search my name, then would it be possible for people to find books that I write when they search his name?

So I sat down for several months and just began to develop a book called, Bondage and Freedom: Breaking The Trap of Pornography. The real goal of that was to write a book that helps people who are in the throws or in the grips of pornography, pornographic addiction or obsession, and give some tips and some keys of how to break free from this and how the gospel actually helps a person freed from pornography.

The book’s been really well-received by people. I actually had a guy who wrote a review who said, “This book is for anybody.” He said, “The author’s a Christian, but he doesn’t let his Christian faith get in the way of good advice.” I’m not sure exactly what that means, but I’m glad that he thought and realized that anybody, whether you’re a Christian or not a Christian, would find some helpfulness in this book.

The Goal of Pornography

You see, the truth of the matter is this. Pornography is a multi-billion dollar industry that has one goal: to hook you, to hold you, and to take everything that you have to wreck your life and to ruin it. It’s worse than a casino that takes all the clocks and all the windows out and doesn’t let you know what time it is. The goal of pornography is to prey on the most basic human nature—your sexuality, your temptations, your lusts—the way that God created you.

I’m with guys all the time who say, “God, would you please just take away this desire?” And I say, “God will never answer that prayer.” If God answered that prayer, the human race would cease to exist. So God can’t answer the prayer, “God, take this desire from me.” What God does do is give us the Holy Spirit who the fruit of which is self-control. So God gives us the ability to control ourselves as we battle with pornography.

But in the midst of what the gospel does for us the question might be, what is it that we can do? What are some practical steps that men can take to stay free from pornography? I think there are a couple of things that I would advise for this.

1. Realize the Destructiveness of Pornography

3. Surround Yourself With Help

Third, you’re going to need some help. You see the thing about pornography is pornography is a lot like a mixed martial arts match. You step into a cage, they lock the cage behind you, you’re in there, and you turn around and you realize, “Man, I’m against an opponent that’s much larger than I am, more well-trained than I am. He’s going to take me down.”

What you need to realize is I need help. I need to tap somebody’s hand to get in here and help me out. You need some friends, some people who can come around you, who won’t take your excuses and who will say, “No, we’re going to fight together for freedom.”

You also may need a professional. You may need to get involved with a counseling group or with a support group. You need your church. You need some people who can come around you and can help you break free.

But you need to take some practical steps at home. Control what you do with your telephone. Find a filter that you would use. Put your computer in a place that is publicly accessed. Don’t turn your screen to the wall. Make sure that your back is to the public and people can walk in behind you. 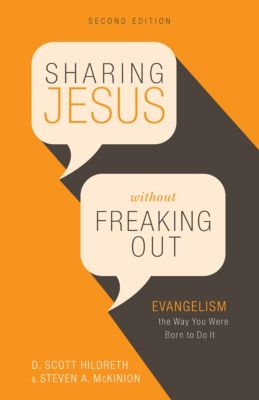 Sharing Jesus Without Freaking Out

Evangelism doesn’t have to be uncomfortable. Sharing Jesus Without Freaking Out is not a comprehensive theology of evangelism or the methods by which that theological message is communicated. The goal of the book is simply to show what evangelism looks like when it’s part of ordinary, everyday conversations.

D. Scott Hildreth is the director of the Center for Great Commission Studies and Assistant Professor of Global Studies at Southeastern Baptist Theological Seminary. He is the author of “Together on God’s Mission" and is co-author of “Sharing Jesus Without Freaking Out."