Throughout the off-season people have come up to me to talk about the Minneapolis Miracle. Fans have great stories about where they were and what they did when Stefon Diggs ran into the end zone to help the Vikings beat the Saints in the NFC divisional playoffs in 2018. Someone asked me if all the hype surrounding the play has changed me. Have I gone big time? I just laughed and said, “I wouldn’t know how to go ‘big time’ even if I wanted to.”

I’ve had accomplishments in football that I’m very proud of, and the sport has given me the opportunity to meet people and do things I never would have imagined growing up in Abilene, Texas. I never would have been able to write Playing for More if it weren’t for football. But during the highs and lows of my career, I’ve tried to maintain an even keel. I was raised not to brag about myself. I can’t let what happens on the field — positive or negative — define me.

Besides, I don’t really stand out in a crowd. If you didn’t recognize me, you probably wouldn’t know I’m an NFL quarterback. When I signed with the Denver Broncos, we went to dinner with team executives, and the restaurant generously asked if I wanted to come in the back entrance to avoid the crowds. I laughed because I knew I could walk in the front door, and no one would bother me, which is just fine.

I tell a story in my book about the time a rookie trying to make the team at Rams training camp approached me in the locker room and asked if I could help him tape his ankles. I was the starting quarterback, and he thought I was the athletic trainer! That kind of thing happens to me all the time. And, by the way, he got one of the worst tape jobs of all time.

I’ve had a non-traditional journey to becoming a starting quarterback in the NFL. I wasn’t a highly touted recruit coming out of Wylie High School. I only had one scholarship offer—from the University of Houston. After setting a whole bunch of college football passing records, I went undrafted. When I finally did earn a starting job in the NFL, I was released by the Houston Texans. When I earned the starting job for the Rams, they went ahead and drafted quarterback Jared Goff with the No. 1 overall pick.

“I’ve always found that when I’m uncomfortable, I grow the most.”

I’ve had ups and downs every season. Most professional athletes do. But as I’ve gone through my career, I’ve learned that my failures have been just as important as my triumphs in shaping the kind of player and, more importantly, the kind of man I’ve become. I’ve always found that when I’m uncomfortable, I grow the most.

Of course, I’m human. I’ve gotten full of myself at times, and on the other hand, I’ve suffered from self-doubt on more than one occasion. But I always come back to the same things: my faith, my family, and my close friends. These are the things and the people who have supported me all along.

After the Vikings’ play-off win, I was so happy that my wife and my family were there to celebrate with me. They don’t see Case the NFL quarterback. They see Case the son, the brother, the loving husband, the Christian, and the friend. That’s really who I am. No matter how many touchdowns or interceptions I throw, these things will never change.

A lot of neat things have happened since the Minneapolis Miracle. I got to go to Los Angeles to accept an ESPY Award for the team. I played in a celebrity golf tournament at Lake Tahoe. I had the opportunity to share what’s important in my life and to let the fans get to know me a little better by writing Playing For More. And I signed with the Denver Broncos — a first class team and organization. I have so much gratitude for all of it. But none of that has changed the fact that I’m Case from West Texas.

So if you do happen to run into me, I won’t be offended at all if you can’t quite place me. Just do me a favor. Don’t ask me to tape your ankles. Because it turns out, I’m just not any good at it. 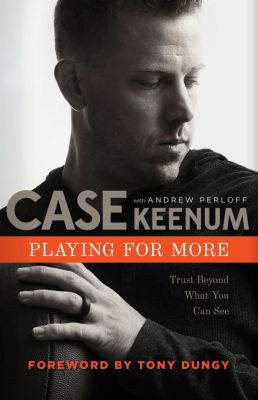 Throughout his story, Case will explain how being a Christian helped him navigate the winding path to success. No matter what obstacle has been placed in front of him, Case believes God has a plan for him.

Case Keenum is the player that everyone is rooting for. In his new book Playing for More, Case Keenum relives his journey from West Texas high school standout to NCAA record-breaker to NFL division champ to now the starting quarterback for the Denver Broncos. After a discouraging first two years in the NFL, Keenum has emerged stronger than he knew possible. Coming off of leading the Minnesota Vikings to victory in what became known as the “Minnesota Miracle,” Keenum is prepared for continued success through his gratitude and determination. Keenum lives in Denver, Colorado and is married to his high school sweetheart, Kimberly.