Onward—Pixar’s 2020 film about two brothers on a quest to magically spend a day with their deceased father—has a lot to say about fatherhood, familial ties, and the importance of learning from your past.

In an increasingly secular age, it’s not surprising that the good themes are muddled by worldliness. Onward is not without problems, and as far as PG ratings go, this one certainly warrants a pre-watch before inviting your kids to sit down and enjoy; but buried in those thematic depths are some gospel-centered gems. Beware of spoilers to the plot as I attempt to navigate these murky waters. [Note: Viewer discretion advised. We recommend checking out a more in-depth review of the themes and ratings of the movie before watching.]

A World Without A Father

Onward’s opening few minutes show us a world that used to be filled with magic. Though magic was useful, it was difficult to control. Over time, the fantasy world adapted to look a lot more like our modern American culture. People traded their wizard staffs for electricity, internal combustion engines, and other technological advancements.

Soon after this broad introduction to the world, we meet Ian Lightfoot (voiced by Tom Holland), an elf, on his 16th birthday. Ian’s father isn’t in the picture, and we soon learn it’s because he died just before Ian was born. Ian is revealed to be insecure, quiet, and fearful of confrontation, quite the opposite of Barley (voiced by Chris Pratt), his bumbling, underachieving older brother who is obsessed with the magical days long past.

Things really kick off when Laurel (their mother, voiced by Julia Louis-Dreyfus) reveals a special gift: a wizard staff and spell instructions their father had set aside for them when they were grown. The spell would allow them to bring their father back for one day. When the spell misfires, the brothers find themselves in need of a new MacGuffin to complete the spell and bring back more than just their father’s legs.

Over the course of their adventure, Ian begins to see that he needs Barley, who had assumed a father-like role in Ian’s life. The two bond over the course of the adventure, and Barley eventually reveals that his fearlessness comes at a cost; Barley carries a haunting regret that he was too afraid to go in and say goodbye to his sick father.

When time runs short and a dangerous beast intends to stop the two from summoning their father’s top half, Ian sacrifices his only chance to meet his father so that Barley will have a chance to say a proper goodbye.

A central theme of the movie—the importance of surrogate father figures—is slightly confused by the character of Colt Bronco, Laurel’s boyfriend. The brothers bond over their mutual distaste of him, and his desire to stop their quest and bring them home solidifies him as an antagonist. Eventually, Colt learns about the time-sensitive nature of their once-in-a-lifetime opportunity to spend more time with their father. Had Colt sighed, given the boys an awkward hug, and sent them on their way, the writers would have pulled double duty: softening Colt’s character to give him some dimension, while also underscoring the positive role step-parents can occupy. Instead, Colt doubles down on his plan to take them home and calls in a swarm of other police officers to apprehend the teens.

But even this narrative choice helps to highlight the centrality of the gospel to all parts of life. Colt provides us a look at fatherhood failing—exasperating his children and holding them back from reuniting with their true father. Meanwhile, Barley uses every setback to push Ian, well, Onward!

In the movie, Barley consistently proves how willing he is to sacrifice the things he values most to give Ian the chance to meet their “true father.” Thus, Barley succeeds where Colt fails and gives us a good picture of human fatherhood at its best.

Psalm 68 teaches that God is Father to the fatherless. Even the world’s greatest dad is born mired in sin. Any father, biological or otherwise, can do no better than to point his children to the Father who will never fail them.

So, if you decide to give Onward a watch, keep your eyes peeled for glimpses of biblical fatherhood on display. And if you decide to watch with your family, consider using these discussion questions to help guide your kids to see things through a biblical lens. 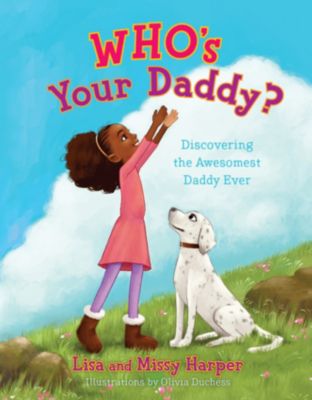 Who’s Your Daddy? by Lisa and Missy Harper

Missy has lived with her new mommy ever since she was adopted from Haiti. But when someone asks little Missy a BIG question—”Who’s your daddy?”—she starts thinking and learning a lot about daddies. No matter what our family looks like, we all have the same amazing Daddy; and Missy can’t wait to tell everyone about the Daddy who loves us more than all the stars in the sky.

Sam O'Neil is the author of the forthcoming children's book "Searching for the Savior" and a content editor for The Gospel Project for Kids. He oversees the production of the Younger Kids Leader Guide and the Kids Worship Hour Add-On. He attends City Bridge Community Church in Plano, TX where he serves in CB Kids as a group leader for 4th grade boys. He, his wife, his son, and his dog live in Plano, TX. His hobbies include over-analyzing films and writing fiction.