Recently, Trevin Wax had the opportunity to sit down with Dr. Tony Evans via video chat to speak on some of the racial injustice and discrimination issues facing our country and the church. In this first video in the series, Dr. Evans talks about how the gospel speaks to all of life.

Trevin Wax: It’s an honor this morning to be with Dr. Tony Evans. He is one of evangelicalism’s leading pastors, leading thinkers, leading writers, and it has been a privilege to work with him over the years on a number of projects, including the Tony Evans Study Bible and the Tony Evans Bible Commentary.

Dr. Evans, we have invited you here today to speak to some of the issues and challenges that are facing our country and the church in this moment. And, you know, you’ve been a minister of the gospel for decades now. You’ve preached the gospel, you’ve seen people’s lives transformed by the cross of Jesus Christ. How does your commitment to the gospel inform the way that you’ve dealt with your own experience of racial injustice and discrimination over the years?

Tony Evans: One of the things I’ve had to confront, both theologically and practically, is the issue of the content of the gospel versus the scope of the gospel. I grew up with being taught the content of the gospel—the death, the resurrection of Jesus Christ, and faith in Him for the gift of eternal life. But I was also seeing a dichotomy where the gospel was not being applied to all of life. It was being applied to our eternal destiny while there was still racism and churches would not allow me in.

I couldn’t—I drove on Bob Jones University campus one day and they let me know I shouldn’t be there because of race, and yet it was a gospel-preaching environment. There was a church in Atlanta where the church virtually split because I showed up with one of my professors. So, these were strongly known as “evangelical,” yet strongly discriminatory. I was told when I got into radio that a black speaker would offend too many of our listeners. But they were clear on who Jesus was.

But when I began to do my own biblical research related to the gospel, it became clear that the gospel’s content, which is narrow, has a much bigger scope. In other words, a much broader application in terms of all of life. When Paul was correcting Peter about his racism in Galatians 2, he says, “Peter, you are not acting in concert with the truth of the gospel.” Peter’s already on his way to heaven; the issue was that he was not applying the gospel to all of life.

So when I saw the scope of the gospel, it was clear to me that evangelicalism had left out a major part of biblical teaching, thus contributing and even leading in the division that we’re now experiencing today. And if the church was a co-conspirator in causing it, then the church needs to lead us out of this by understanding the gospel’s content as well as the gospel’s scope.

Trevin Wax: So, Dr. Evans, there are some pastors, when they look at this situation that we’re facing right now, some pastors—many white, some even who are African-American—who would say it’s counterproductive to preach about racial strife or racial injustice because that’s a social issue. That could distract us from the content of the gospel, like you said before. So how would you respond to that concern?

Tony Evans: I would say, anyone who says that, no matter their color is, has missed the Scriptures. Over and over again, justice and righteousness are paired up.

“Once we get this right, the culture will have something to mimic.”

So when you argue for a moral walk with God—righteousness—and you do not equally argue for the equity among men based on God’s standard—justice—then you have dismissed half of what God wants operating in society. And so those preachers who argue that are not preaching the whole counsel of God. So where there is injustice, which is talked about all throughout Scripture—the oppression of the poor, when God’s standards are not being applied to the alien and the stranger, over and over throughout Scripture—then what we have done is we have contributed to society a basis of divisiveness that God never intended. And it really falls at the feet of the church.

Slavery would not have been allowed to stand, which would have taken us out of all of this, if the church—in this case the white evangelical church—took seriously what the Scripture said, like in Exodus 21:16 where it says if anyone kidnaps anybody it’s a capital crime. Well, if that Scripture was taught, it would have ended slavery immediately. 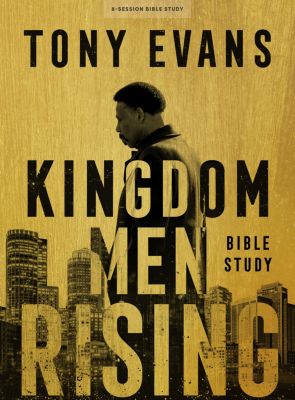 In this Bible study, men will wrestle honestly with the unique questions and circumstances they face today. It invites men deep into their own stories to reveal the true expression of masculinity—God’s intent.

Tony Evans is a pastor, teacher, author, speaker, and one of the country's most respected leaders in evangelical circles. Through his local church, Oak Cliff Bible Fellowship, and national ministry, The Urban Alternative, Dr. Evans promotes a Kingdom agenda philosophy that teaches God's comprehensive rule over every sphere of life as demonstrated through the individual, family, church, and society.