One week has passed since the deadliest, most destructive fire in California history swept through the town of Paradise. Today, more questions than answers linger in the smoke-filled air, but people are finding hope even in the ashes.

On Thursday, November 8, I had just finished my lunch when my cousin sent me a private message. “Denise, have you heard from your mom? We’re trying to find out if they made it out of town?”

Living 500 miles away, I didn’t know what she meant, but I figured it couldn’t be good. I quickly dialed Mom, and she answered, “Yeah, we’re okay. The town is on fire, and we had less than an hour to throw some clothes in a suitcase. There were flames on both sides of the road. But we’re okay, we’re okay.”

My parents live in Paradise, at least they did until the fire. Now, they’re not sure. While journalists and politicians tour what’s left of the fire-scorched town, the residents have yet to be allowed back to see if their homes are one of the few left standing. Reports claim more than 7,500 homes have been destroyed by Camp Fire, along with 260 business structures. In a town of approximately 26,000 people, that means 80-90% of the town is gone—obliterated in less than a day. Worse still, 48 lives have been lost and there’s a strong concern that number will rise since another 200 are missing.

Where do the people of Paradise go from here?

Unlike the Woolsey Fire that erupted the same day in Southern California, the people of Paradise aren’t losing their Malibu mansions. Much of the population is comprised of working-class folks, who live paycheck to paycheck, and retirees like my parents, who had planned to live out their days in a modest but comfortable home nestled among pine trees.

Admittedly, my parents are faring better than most. They’re staying at my brother’s house in the nearby town of Chico while thousands of displaced families are sleeping on cots at shelters. Thousands more have set up a temporary refuge, called the “city of tents,” in the Walmart parking lot. Reports say there isn’t a hotel room or an Airbnb available within a 100-mile radius. There simply isn’t anywhere to go.

“For many, they’ve not only lost their homes to the fire, but they’ve lost their places of employment, too.”

For many, they’ve not only lost their homes to the fire, but they’ve lost their places of employment, too. How will they rebuild their lives? And how can we, as the body of Christ, come alongside them?

First, we can pray.

That may sound trite given the enormity of this crisis, but without Christ, we can do nothing. (John 15:5) Pray for the 5,500+ firefighters who are on the frontlines of a firestorm that is presently only 40% contained. Pray for the displaced. Pray for the town’s leadership as they sort through the aftermath and try to determine their next steps. And at the risk of sounding cliché, pray for rain. It’s been months since the last drop fell from the sky, adding to the parched conditions of the terrain.

Second, connect with local churches and shelters to learn of specific needs. They’re the ones on the ground floor. They know the names beyond the numbers.

Third, if you know of housing vacancies or available jobs, even in other states, contact local news sources—like the Paradise Post—who can consolidate these much-needed lists online.

All the nearby towns in Northern California combined will not have enough housing vacancy or enough of a job market to accommodate such a massive influx of homeless job-seekers. As the shock of this new reality seeps in, some will be forced to relocate out-of-state to wherever they can find work.

Among the ashes, however, there have been glimmers of hope and acts of kindness that will not soon be forgotten. Doctors and nurses used their cars to transport patients to hospitals in other towns as their own hospital succumbed to the flames. Drivers picked up strangers along the road as they fled the flying embers. Churches in the surrounding area turned Sunday school classrooms into temporary homes.

The people of the Good News are being good news for those who are afflicted with the worst news.

While talking with my mom on the phone, her voice remained calm with a steady resolve. The only time her voice cracked was when she remembered two quilts, every stitch made by hand. She was saving them for my two daughters. “Those quilts were made by their great-great-grandmother,” she said. Irreplaceable.

Then Mom said, “Whether our home is gone or there when we return, we’ll be okay, either way.”

And I knew she meant it. She knows this world is not all l there is. We’re citizens of heaven, and we’re not taking any of our stuff with us. (Philippians 3:20)

But as the days passed, I admit I thought about those quilts, until I remembered a gift Mom sent a few years ago. It was her old burgundy leather-bound Bible, the one she read when I was a kid. It’s much worn, with many annotations and earmarked pages, and now it may be all that’s left of my mother’s possessions. More than ever, it’s a beautiful reminder of the words Jesus spoke: “Heaven and earth will pass away, but my words will never pass away.” (Matthew 24:35) 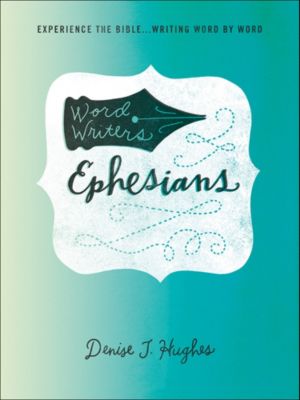 The book of Ephesians calls you to carry on with a rich understanding of God’s love and the strength to serve those around you. Get ready to explore this magnificent book through the tried-and-tested inductive study method — with an added writing step to help you treasure each word!

Denise J. Hughes is the General Editor for the CSB (in)courage Devotional Bible and the author of Deeper Waters: Immersed in the Life-Changing Truth of God’s Word. She has taught composition at Azusa Pacific University, and she is currently pursuing an M.Div. at Gateway Seminary. You can connect with her at denisejhughes.com and on Instagram: @DeniseJHughes.