2020 has been a difficult year. From shutdowns and quarantines caused by a global pandemic, to national protests over ongoing racial injustice, the world seems to be in a constant state of upheaval. As a way to instill a sense of normalcy in this far from normal season, my family instituted a weekly Monday movie night. This new tradition gave me a reason to rewatch and reflect upon a recent favorite, Pixar’s Inside Out.

If you’re not familiar with Inside Out, it tells the story of an 11-year-old girl named Riley who moves from rural Minnesota to San Francisco for her father’s job from the perspective of five anthropomorphic emotions. The team at “Headquarters” is led by Riley’s primary emotion, Joy (voiced by Amy Poehler), and rounded out by Sadness (Phyliss Smith), Fear (Bill Hader), Anger (Lewis Black), and Disgust (Mindy Kailing). [Note: Viewer discretion advised. We recommend checking out a more in-depth review of the themes and ratings of the movie before watching.]

Riley misses her old school, friends, and hockey team, but her primary emotion, Joy, tries to make the best out of life in a new place. The central conflict begins when Riley is asked to introduce herself to her new class. Joy assists Riley by projecting a happy memory of playing pond hockey back in Minnesota. But as Riley begins to share, Sadness assumes the controls, and she begins to cry in front of her new classmates, producing her first sad core memory.

Joy rushes to stop the new memory from becoming permanent, but her attempt is interrupted when she and Sadness are sucked into Riley’s subconscious along with the rest of the core memories. With two primary emotions absent from headquarters, Riley becomes listless and depressed.

From here, the film follows the familiar beats of a buddy comedy as the two unlikely partners trek back to Headquarters. Joy spends most of the movie annoyed with or grudgingly tolerating sadness. Yet through their journey, Joy begins to understand Sadness and the necessary role she plays in Riley’s life. At its core, Inside Out is a movie about dealing with sadness.

Both Joy and Sadness

Thinking about Inside Out in the context of 2020 led me back to a favorite passage of Scripture. In Ecclesiastes 7:14 Solomon wrote, “In the day of prosperity be joyful, but in the day of adversity, consider: God has made the one as well as the other, so that no one can discover anything that will come after him.”

In one verse, Solomon cosigns the central premise of Inside Out—both joy and sadness serve a purpose in our lives. All our days—the good and bad alike—come from the hand of God.

Like Riley, we cannot be certain whether the day ahead of us will be filled with happiness or disappointment or some mixture of both. Or as Solomon said, “There is an occasion for everything, and a time for every activity under heaven” (3:1). Even though we don’t know what the day will bring, we can be sure God is with us.

No one could have expected what 2020 brought. Yet God knew. What we call unprecedented, God has known about since before time began. His will is not thwarted, and He’s not caught off guard. Yet, since the future is obscured from our view, we lack the necessary perspective to see how God will use the sadness of 2020 to shape our lives.

Like all the best artwork, Inside Out is a reflection about what it’s like to be alive. Our emotions are meant to teach us about the world. While joy and anger are easy to understand, we don’t always see so clearly why we might want sadness in our lives.

“For Christians, sadness is an ache that causes us to feel ill at ease in the world and long for a better one.”

Sadness is triggered by a loss and is necessary to grieve and move forward. For Riley, Sadness helped her process the sense of loss she felt leaving home and gave her the framework she needed to adjust to a new city while appreciating her hometown.

For Christians, sadness is an ache that causes us to feel ill at ease in the world and long for a better one. It is triggered by a similar sense of homesickness for a city whose builder and architect is God. It’s a longing for the joy of a pre-fall existence which will be ours in the new heaven and new earth.

Sadness points us to a day when our days of adversities of pandemics and injustice will be no more, when all the vanity of toiling under the sun will give way to the inexpressible joys of heaven (2 Corinthians 4:17). Until then, sadness is a God-given guide to help us deal with the grief of this world knowing just as there is a time to weep, there is also a time to laugh. 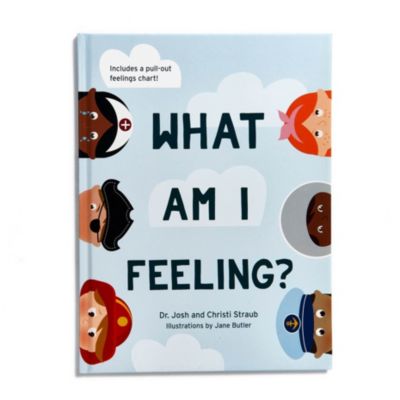 What Am I Feeling?

In a world where kids are dealing with everything from sibling rivalry to bullying, divorce to tragedy, What Am I Feeling? offers a biblically grounded way for children to verbalize their feelings, develop empathy and self-control, and understand their wonderful God-given emotions.

Reid Patton is an editor and content creator for Lifeway Christian Resources. For the past ten years, he has developed Bible study resources for pastors and churches across the country. Outside of work, Reid enjoys reading books, following the NBA, listening to records, watching movies, and researching his next trip to Walt Disney World. He lives in Spring Hill, TN with his wife, Kristen and daughter, Ceile. You can find him on Twitter at @jreidpatton.