As a kid in the late 90s and early 2000s, I was one of many children who grew up watching (adoring) Barney the purple dinosaur. Of course, I was so young I barely remember this stage in my life, but embarrassing photos of me wearing my favorite Barney overalls (yikes) make it hard to forget.

My parents enjoy telling a story of when I was probably about two or three years old, standing on top of our bathroom sink singing a Barney song in front of the mirror. The song went something like, “I can do it. There’s nothing to it. I can do it, by myself!” I apparently continued to confidently sing this tune until, in sudden self-realization that I was atop a very tall sink for a very little girl, I shouted, “Somebody get me down from here!”

Obviously, at two or three years old, I couldn’t do everything “by myself,” regardless of my tune’s catchy affirmation. Despite my surface-level confidence in doing everything by myself, when it came time to complete the actual task, I sent out a desperate cry for help for someone bigger than me to rescue me from the height of the sink.

Fast forward almost 20 years. As a young adult entering into my first summer as a college graduate, I felt similar to how toddler-me did—confidently asserting I could do it, by myself, and yet, at the same time, being struck with a wave of panic that I actually had no idea what I was doing and definitely could not do it all by myself.

Graduating from college is often the first step into “real” adulthood, and the immediate summer after can be a weird time. Some friends move on to graduate school; others already have a career position lined up that starts the week after graduation; some are working a typical summer job again; others have big travel plans. Schedules with your friends simply don’t line up as easily (vacation days are limited now!), and you may suddenly feel alone in a much bigger world.

I’ve come to love my summers as a young adult, and it’s encouraging to look back and see how I’ve grown and learned ways to have full, meaningful summers. Yet it’s so easy to let these things slip, so it’s best to start prioritizing them sooner rather than later to make the most of your post-college summers.

Be intentional with relationships.

You don’t have to do it all by yourself. Sure, becoming an adult requires taking on certain responsibilities, but it’s OK to ask for help when you feel like you need direction or recognize that you’re discouraged and need someone to talk to. Maintaining close relationships as an adult can be hard, especially if these friends and/or family members are cities, states, or even countries away, but it is so important to keep connections with people who already know you on a deep level. Embrace the technology we’ve been given and keep up communication with them. Casual pool days and spontaneous late-night summer hangouts may be more infrequent, but if possible, try to go ahead and schedule visits with one another this summer. Show people that you value their friendship.

“You don’t have to do it all by yourself.”

Don’t forget to be on the lookout for new friendships as well! Starting your first job can be an intimidating adventure when you’re the youngest in the room: I went from being a college senior with a prominent leadership position on campus to a young woman feeling like I was suddenly in the lower echelon again in a career world where everyone was older and more experienced in their jobs.

A verse that encouraged me during this time is 1 Timothy 4:12: “Don’t let anyone despise your youth, but set an example for the believers in speech, in conduct, in love, in faith, and in purity.”  Now, in my experience, I truly don’t think anyone was actually “despising my youth,” so the verse really became more of a reminder to me not to count myself out. Even though I was young and still learning, my voice had value, and I’m grateful for those around me who encouraged me in this. Learn to look past your insecurities and embrace intergenerational friendships with those older and younger than you (see Titus 2).

Develop good routines and healthy habits before and after work.

Before graduating college, summer was typically a time with fewer responsibilities and a freer schedule. I do sometimes miss this, but I’ve also found that one of the best things about working and being on your own is having the ability to develop a good routine and consistent rhythm in your life.

I’ve learned the first thing I need to do after finishing work is go outside and have some form of physical activity. This key habit helps me feel healthier and mentally refreshed. Like Justin Whitmel Earley says, practicing ordinary habits can shape your soul in the most extraordinary ways.¹

All in all, the most valuable rhythm you can develop is spending time with God. Our relationship with Him is the most important one we have. John 10:3b-4 says, “… He calls his own sheep by name and leads them out. When he has brought all his own outside, he goes ahead of them. The sheep follow him because they know his voice.” God is always with us, but it’s so much easier to hear our Father’s voice and step out in faith when we’re daily walking with Him.

If you’re ever feeling lonely, confused, or discouraged in this new season of life, first go to Him. He will rescue you and guide you. If you have good news and are feeling encouraged and excited about the future, share that with Him, too. He will love and rejoice with you. 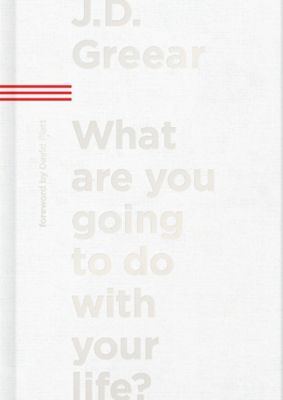 What Are You Going to Do with Your Life?

In this book, J.D. Greear considers Jesus’ radical call to give your life away to the greatest cause of all. To view your life from the perspective of eternity. To start making decisions now that you’ll be glad you made then.

Erin Franklin is a production editor on the Lifeway Women Publishing team. A 2019 graduate of Lipscomb University and a lifelong Tennessean, she enjoys a good ping-pong match, photography, and learning new things. You can connect with her on Instagram @erin_franklin and on Twitter @erinefranklin.