For the past year, I’ve been fighting two wars. The first is a book manuscript dealing with bodies, the incarnate Christ, and the exercising of physical touch in an over-sexualized world. The second battle is more personal: it’s a war with my own flesh. “This long struggle to be at home in this body, this difficult friendship,” the poet said of it. We Christians know the tension is a light one because these bodies are not our homes but as the old Spiritual says, we’re still “a passin’ through.” As long as we live on this earth as it is we live in these bodies as they are.

Wishing for a Different Body

As I’ve been reckoning with the bodies of work (the puns on this subject are exhaustive) on the human body, trauma, neural pathways, sin, embodiment, and the hands of Jesus, I’ve been dealing with some health issues in my own body that make it uncomfortable to dwell here in this body on this earth. I would rather have another’s body, or, at the very least, a body that obeys my commands and will. I would like to blow my hair straight and have it lay like silky and shiny, but within mere hours it is frizzy with persistent ringlets at my nape who threaten to dread themselves if not brushed often. I would like to lose weight without having to eat a mere thousand calories a day. I would like to have smoother skin and more nimble joints. I would like to conceive and bear children instead of losing them as soon as their cells begin to divide and conquer my body. Oh, they protest, they have still conquered my body, as miscarriage after miscarriage has had their way. I would like to be the body I am not and not the body I am.

“True worship of God starts and ends with seeing God in all his magnificent glory.”

I have spent nearly 40 years trying to be the body I am not. I remember with startling clarity the moments I began to look for another body: the words a friend’s mother said about my pubescent body, the comment from the preteen girl with the perfect nose and teeth, the jovial jokes my family made about our genetic disposition (male and female) for sturdy thighs—these all took my eyes away from the fearfully and wonderfully made creation of the body God gave me and put my eyes on the impossible pursuit of the bodies God gave others. I worshipped the form I couldn’t have. I became a slave to the body I wanted, counting calories, straightening my hair, trying every new diet with a hashtag and eliminating every food group one at a time.

This past year, as I’ve worked on this book manuscript, I’ve also begun shedding this terrible cloak of pursuit and I’ve had to recognize the body beneath it.

True worship of God starts and ends with seeing God in all his magnificent glory, but if we cannot see our utter inability to both be God or be like Him, knowing all, then our worship is faulty and flimsy. To truly see God, we also have to see ourselves in our utter brokenness, weakness, and glory.

For too long, I’ve been party to a theological system that disparages not only my own body but the bodies of others, giving credence to the more invisible mind or heart or soul. But if we separate the body from the mind or heart or soul, we begin to limp in a world we inhabit as embodied beings. God did not merely make us spirits, hovering over the face of the earth. He took dust and bone and breathed life and made something beautiful from something not. Our bodies are not simply broken and weak, they are also spectacularly intricate, formed wonderfully and fearfully in the image of God, knit together, bone, sinew, blood, cells, ligaments, hair, eye color, fingernails, and teeth. They are not forever, these bodies, but they are here and to be here, Rilke said, “is so immense.”

To live in these bodies, the bodies we have, and to not constantly pursue the bodies we don’t have, is our spiritual act of worship. To offer these bodies as living sacrifices—not to burn on some altar for which there is no longer any need, but to live, truly live in sacrificial and embodied ways, this is worship. To submit to the bodies we have, and not the bodies we simply want, is to acknowledge that God is God and we are not. It is to acknowledge that He is sovereign and we are created. It is to reckon with the reality that every person on earth is living a difficult friendship with the bodies they’ve been given, the stories they inhabit, the genetics they’ve inherited, the systemic issues they bear in their bloodlines.

For 90 years, nearly 100 if my grandmother’s genes were passed to me, I will embody this body. This is the one I will steward, love, lean on, and worship with. It is the only one I have, given to me by God to remind me I am not God, but I am made by Him with purpose, intention, and beauty. 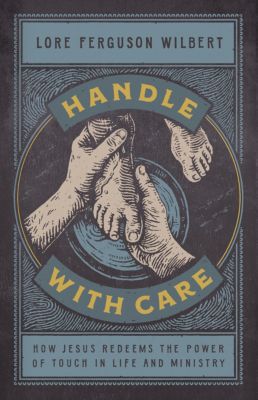 What could it mean for families, singles, marriages, churches, communities, and the world to have healthy, pure, faithful, ministering touch? Somewhere in the mess of our assumptions and fears about touch, there is something beautiful and good and God-given. As Jesus can show us, there is ministry in touching.

Lore Ferguson Wilbert is a writer, thinker, and learner. She blogs at Sayable.net, tweets and instagrams at @lorewilbert. She is a member at The Village Church in Texas and the wife of a man named Nate.