Every human being goes through a period of singleness. But why? In this video from the Life + Love Bible study, Pastor of Passion City Church, Washington, D.C., Ben Stuart, explains the purpose of singleness and what each of us were created for.

It’s interesting. Every couple of years Apple comes out with a new iPhone. And they’re always launched with great fanfare. Millions are in use within a couple of weeks of its creation.

Every single time they do one, there’s a big announcement. And as they gather and announce it to the world at the big press release, you’ll notice that they never say things like, “Notice how the iPhone can be jammed under this door to hold it open. We are revolutionizing room entry.” Or you never hear them say, “Look how it evenly spreads butter across toast.”

Why don’t they do that? You can do that with an iPhone, but they know that we know that’s not what it’s designed for and that the highest satisfactions experienced and the greatest potential is reached when it’s used according to its design.

So if great “whats” are motivated by great “whys”, why are you here? And why are you single? Why has God ordained that every human being experience a season of singleness?

Well the apostle Paul tells us in 1 Corinthians 7, as he is championing singleness to this community. He says about it, “I’m saying it for you own benefit, not to put a restraint on you, but to secure an undistracted devotion to the Lord” (1 Corinthians 7:35).

Did you catch it? Paul just told you the reason singleness exists. And it’s not to get to marriage. If singleness existed just to get us to marriage then Jesus Christ was a failure. And I don’t know anyone who’s willing to say that.

Because marriage is great, but it can be distracting. There’s certainly all kinds of responsibilities, different things I have to manage. And singleness affords a freedom. And it’s freedom for the purpose of focus.

But it’s interesting in the world today when I hear people use the word “focus”, I usually hear one of two words come after it. First is the word “career”. “I’m just focused on my career right now. I’m just trying to get ahead, trying to climb the ladder, trying to make my first million, rise and grind.” That sort of thing. Or I hear them say, “I’m focused on me. I’m just trying to do me right now.” But neither of those things are gonna satisfy your human heart, because that’s not what you’re for.

Paul said it to the Colossians, “that all things are made by Jesus and for Him” (Colossians 1:16). You’re not just made by God, you’re made for God. And Augstine was right, your heart will be restless until it rests in Him. So God, in His mercy, ordains that every human being has a season of singleness so we can focus on that foundational relationship. And it’s a kindness.

You see it in Jesus’ relationship with the woman at the well. You remember as He came to her, He’s telling her about living water that will not only satisfy you, but it will well up into eternal life. And she says she wants it and then He starts talking to her about the five husbands she’s had and the sixth guy she’s now living with. Why does He bring that up? What He’s letting her know is you’re thirsty, but you’ve been trying to satisfy that thirst in men and they can’t do it. You need to come to Me first. Don’t look to a guy or a girl to do what only God can do. We have to get a relationship with God right before we’ll ever get a relationship with a guy or a girl right.

So God, in His kindness, gives us this season with its freedom so we can focus on this foundational relationship of knowing Him. 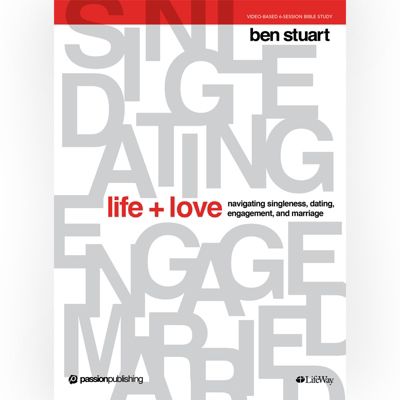 In a society where everyone is supposedly more connected, why do people feel so lonely? Even as marriage rates decline, recent studies find the overwhelming majority of single adults still hope to get married. But how can you navigate life and love in this disconnected culture?

Ben Stuart is the pastor of Passion City Church, Washington D.C. Prior to joining Passion City Church, Ben served for eleven years as the executive director of Breakaway Ministries, a weekly Bible study attended by thousands of college students on the campus of Texas A&M.