Wonder became a beautiful companion fifteen years ago when a test confirmed my fourth pregnancy. I knew from experience that a sweet heartbeat and ultrasound pictures would soon give a sneak peek of the little person growing inside me. And so wonder took me by the hand and let me ponder that secret place where God does his intricate and intentional work of knitting.

“For it was you who created my inward parts; you knit me together in my mother’s womb. I will praise you because I have been remarkably and wondrously made. Your works are wondrous, and I know this very well. My bones were not hidden from you when I was made in secret, when I was formed in the depth of the earth. Your eyes saw me when I was formless; all my days were written in your book and planned before a single one of them began.”

As God was knitting my baby girl together, he wrote her book with chapters I couldn’t have envisioned. One chapter had a long-term high-risk hospitalization. A chapter later, a “premature” birthday was written down. Another page detailed months of NICU care. Sometimes God’s story just doesn’t make sense. On those pages of life, wonder seems to be erased.

My youngest sister, Regina, had devastating chapters in her second pregnancy. A March ultrasound showed a boy would join big sister Jordyn. But her doctors had concerns, and further tests confirmed that this sweet boy had the genetic disorder known as Down syndrome. Tests also showed hydrocephalus, and the two diagnoses called leading experts on the Boston obstetrics team to strongly suggest Regina terminate the pregnancy.

“This month reminds us that God’s story of people with Down syndrome is full of wonder.”

As the devastating news hit our family, we had to lean on the legacy of faith handed down from our parents.  Did we truly believe that this child was wondrously made even with extra genetic material that altered his course of development? We fought to trust that this was not an accident or a mistake in God’s handiwork. We spoke life to Regina and her husband Jua, while the doctors continued to speak death by advising termination. And when their son entered the world alive and remarkably made, we praised God, knowing full well that this was His doing!

He was named Josiah, which means “God heals”. And we saw God fulfill His purposes at birth, as the puzzled doctors could no longer see the hydrocephalus. When a heart condition required infant surgery, we remembered God had already written Josiah’s life story and prayed for healing. Over and over Josiah has baffled the brilliant as God’s power has been displayed.

That’s not to say the road has been easy. The intersection of being a black boy with special needs meant Regina and Jua had to persevere and fight in accessing services and overcoming obstacles. Activism grew and shaped my sister into a Boston school board leader who champions children of every race and ability.

Now at eleven years old, Josiah loves to play football, baseball, and dance. He is a nurturing brother to his siblings Jordyn, Joy and Jeremiah. He is an empathic friend, a cheerleader for all, and the life of the party wherever he goes. And through the new children’s book ThoughtFull, Josiah inspires his generation to be like him – full of kind thoughts toward others. So far, God has written delightful and faith filled chapters of Josiah’s life that none of us could have imagined!

Down syndrome awareness month in October is a grand opportunity to stand with the one in 700 who have this most commonly occurring chromosomal condition. Their mothers proudly sport t-shirts saying, “My kid has more chromosomes than yours.” These children and adults want to belong like anyone else. This month reminds us that God’s story of people with Down syndrome is full of wonder. We get to say, “I see you. You matter.” They are just like us, all a remarkable work of God.

If this truth was fully known, it could have an incredible impact on this generation. Imagine if children grew up seeing their friends of all abilities as fellow image bearers, as equally valued to God, and as a wondrous work of intentional design. They could teach us adults a thing or two about seeing the value in every person, made in the Imago Dei. What a wonderful world that could be!

Check out Dorena’s children’s book ThoughtFull, which is about how we can celebrate the value of those who are differently abled. 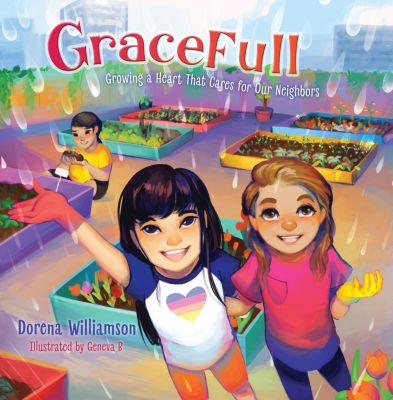 In this follow up to her first two books, ColorFull and ThoughtFull, Dorena Williamson opens a dialogue on the tough subjects of poverty and homelessness and offers children encouragement to show God’s grace and love to others whose home life or homeland might look very different than their own.