Is having sex with a robot a sin? If so, why?

By creating two genders, God designed marriage to include both unity and diversity. There’s diversity in sex taking place between a male and a female, and there’s a oneness, a unity, when they come together in intercourse. Therefore, homosexuality does not jive with the creation account of Genesis 1–2. However, because of our sin nature, we suppress God’s truth to the point that we cannot even read nature correctly (Romans 1:12-27), and even though we have clear commands and statements in the Bible labeling homosexuality a sin (Leviticus 20:13; Romans 1:26-27; 1 Corinthians 6:9-10; Jude 4-7), even some Christians consider “love is love.” But if a sexual act isn’t heterosexual, it’s a sin.

Going back to Genesis 2, God designed sex to occur in a relationship between two people. This principle nixes the notion that we can have sexual relations with just ourselves, which means masturbation—solo sex—is a sin. (Because there’s only one gender involved, it’s also a homosexual act.)

Sex involving a relationship with another person also highlights why bestiality is a sin and why the utilization of sex dolls or sex robots is a sin. Animals, computer screens, dolls, and robots are not people. If a sexual act isn’t relational (occurring between two—and only two—people), it’s a sin.

Not only is sex relational, God specifies the type of relationship in which it’s to occur—marriage. So, incest, cohabitation, and adultery are sin because they’re occurring with someone who is not your spouse.

Working in singles 20s/30s ministry, I often hear the question, “How far is too far?” But the premise of this question is problematic, for it wants to know what we can do before it’s considered sin. If you’re not married, any sexual activity (oral sex, sexual touching or fondling, etc.) is a sin, for the only person you’re to engage with sexually is your spouse. And to clarify here, you might love the person and intend to marry them, but neither dating nor engagement equals marriage.

While sex is more than just a means for procreation, God does intend for it to be fruitful—both in producing children and in strengthening the bond between a husband and a wife. Furthermore, knowing that intercourse can lead to children should affect the way we view sex, with implications for how we think about abortion as well as birth control methods.

As we consider the fruitfulness of sex, keep in mind that the emphasis shifts between the old covenant and the new covenant. While the Old Testament emphasizes the creation commands of multiplying and filling the earth with God’s image (Genesis 1:26-28), the New Testament emphasizes the Great Commission (Matthew 28:18-20). Now, this doesn’t mean that Christians stop having children, but it does mean that all Christ-followers have the responsibility to be spiritually parents.

God designed sex to function best when an individual seeks their spouse’s pleasure and selflessly does what is best for the other person and for the marriage. This implies that the pleasure and feelings of both spouses are important. Furthermore, sex being selfless does not condone sexual violence, including marital rape, for marriage does not equal consent. When Paul addresses the issue of conjugal rights in 1 Corinthians 7:1-4, he’s commanding against selfishness dressed up as spirituality, where prayer and fasting are used as excuses for abstinence. He’s stipulating that one spouse should not withhold sex and relegate the other spouse to celibacy unless it is mutual and for an agreed upon duration.

Ephesians 5 informs us that God designed marriage to be a picture of the relationship between Christ and the church. The one flesh union between a husband and wife is not an end in itself; it points to something greater. Therefore, as we consider whether a sexual act is a sin, we must ask whether that act accurately depicts or distorts the picture of Christ and the church.

“Our sexual practices should accurately mirror the spiritual reality of Christ’s union with the church.”

Our sexual practices should accurately mirror the spiritual reality of Christ’s union with the church. As we consider the ethics of sex robots or any other sexual act, the act must uphold each and every one of these six characteristics of God’s design for sex in order to be permissible.

In talking about sexuality and sexual sin, it becomes easy to focus on all the “don’ts” and, thus, lose sight of the wonderful gift God has given—and what the gift says about Giver. How we think about God, the Creator of sex, affects how we respond to Him and His commands. If I think He’s constantly judging me, is harsh in His treatment of me, or is holding out on me, then why would I want a relationship with Him or want to obey Him? Therefore, as we consider His design and how knowing His design helps us understand what is and isn’t sin, let’s remember the point—to grow in our love for Him, our knowledge of Him, and our obedience to Him. He is worthy of our love and devotion in every area of our life, including our sexuality.

This blog post was adapted from Ashley Chesnut’s new book, It’s Not Just You, and from her talks at YouLead events. 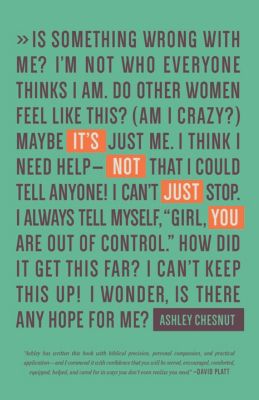 It’s Not Just You

Ashley Chesnut serves as the associate singles 20s/30s minister at The Church at Brook Hills in Birmingham, Alabama, and she has a master of divinity from Beeson Divinity School. Ashley has a passion for discipling young women. She also loves her city and has authored a child’s guide to Birmingham titled Down in the Ham. When she’s not at the church or meeting with girls, you can probably find her at the farmer’s market or trying some new local restaurant.