A gentle snow falls on a cluster of evergreen trees, while a streetlight gives off a warm glow. This isn’t the scene of a bustling small town celebrating Christmas. Rather, it’s the first glimpse Lucy Pevensie has of Narnia, where it is, according to Tumnus the Faun, “Always winter and never Christmas.”

In C.S. Lewis’ classic series The Chronicles of Narnia, Christmas does eventually arrive and with it Aslan, who brings with him new life—both literally and figurative—to the land. Here in our world, parents and children often read the books, watch the movies, or simply reflect on the stories this time of year.

With The Chronicles of Narnia, followers of Christ can find encouragement from the subjects of Aslan. Specifically, here are seven discipleship lessons from Lewis’ fantasy world, one from each book (in publication order as that is the only proper reading order).

Find your identity in Christ.

The Lion, the Witch and the Wardrobe

Edmund betrays his brother and sisters because of selfish desires and runs to the White Witch. Eventually, however, he comes to his senses and is rescued and restored by Aslan. The Witch comes to Aslan’s camp and says she still has a claim over Edmund’s life.

“’You have a traitor there, Aslan,’ said the Witch. Of course, everyone present knew that she meant Edmund. But Edmund had got past thinking of himself after all he’d been through and after the talk he’d had that morning. He just went on looking at Aslan. It didn’t seem to matter what the Witch said.”

You can hear the echoes of Hebrews 12:2, where the writer encourages believers to continue running the race while “keeping our eyes on Jesus, the pioneer and perfecter of our faith.” For the Christian, we are to lock our eyes on Christ and follow Him. We find our identity and purpose in Him, no matter the accusations Satan hurls at us.

In numerous places in Prince Caspian, older characters, particularly the evil ones, dismiss the importance or abilities of younger people. Trumpkin, a good dwarf, initially downplays the arrival of the Pevensies because of their ages until Susan bests him in arrow shooting and Edmund defeats him in a sword duel. Caspian, the rightful king of Narnia, faced his own doubts about taking on such a responsibility at his age.

“’Welcome, Prince,’ said Aslan. ‘Do you feel yourself sufficient to take up the kingship of Narnia?’

‘Good,’ said Aslan. ‘If you had felt yourself sufficient, it would have been proof that you were not.’”

In Matthew 18, Jesus draws the attention of His disciples to a small child and tells them they have to become like that child, or they’ll never enter the kingdom of heaven. In 1 Timothy 4:12, Paul tells his young protégé to not let people despise him because of his youth, but to set an example for others. Experience can be a great thing, but the Christian should never lose their youthful passion for and childlike trust in their heavenly Father.

Persevere until the end.

Voyage of the Dawn Treader

C.S. Lewis described this book as being about “the spiritual life (especially Reepicheep).” The valiant mouse Reepicheep is sailing with King Caspian and other Narnians to find seven missing lords, but he aims to go even further. He is determined to reach Aslan’s country.

“My own plans are made,” says Reepicheep. “While I can, I sail east in the Dawn Treader. When she fails me, I paddle east in my coracle. When she sinks, I saw swim east with my four paws. And when I can swim no longer, if I have not reached Aslan’s country, or shot over the edge of the world in some vast cataract, I shall sink with my nose to the sunrise …”

Paul often describes the Christian life as a race to finish. In 1 Corinthians 9:24, he tells believers to “run in such a way to win the prize,” which he notes is an “imperishable crown.” We continue to follow Christ with all we have until He calls us home.

Aslan calls Eustace and Jill to Narnia to find the lost prince. But before sending them off on their journey the lion gives Jill some signs to help her complete the task. He “made her repeat them again and again until she could say them perfectly.” Still Aslan challenged Jill to continue to devote the signs to memory.

Lewis is clearly alluding to Deuteronomy 6:7 and God’s commands to His people to repeat God’s commands to their children and talk about them “when you sit in your house and when you walk along the road, when you lie down and when you get up.” To faithfully follow God, we must spend time with Him in prayer, in His Word, and with other believers in a local church family.

The Horse and His Boy

Shasta and Aravis, along with the talking horses Bree and Hwin, are trying to escape Calormen and warn Archenland of an upcoming attack. Fleeing a lion, the quartet stumble, exhausted, safely into the home of a hermit. Instead of being allowed even a moment’s rest, Shasta is sent on to warn the king of Archenland.

“Shasta’s heart fainted at these words for he had felt he had no strength left. And he writhed inside at what seemed the cruelty and unfairness of the demand. He had not yet learned that if you do one good deed your reward usually is to be set to do another harder and better one.”

The Christian life is not an easy one. First Peter 4:12 says we should expect “fiery ordeals” that come to test us. True discipleship, as Eugene Peterson put it, is “a long obedience in the same direction.” The direction and duration of our discipleship matter much more than our pace. We must just keep following Christ.

Satan is a liar.

In the creation story of Narnia, Digory wants to ask Aslan to help his seriously ill mother. Instead, Aslan sends him on a quest to retrieve an apple from a special garden. After picking the apple, Jadis the witch tempts Digory to steal the fruit for his mother or even eat it himself. When he resists her, she lashes out.

“’Go then, Fools,’ called the Witch. ‘Think of me, Boy, when you lie old and weak and dying, and remember how you threw away the chance of endless youth! It won’t be offered you again.’” Jadis the Witch would live over 1,000 years and become the White Witch who placed Narnia under her wintry spell. Digory, however, would live to see Aslan bring the entire world of Narnia to an end, more than 1,000 years after the Witch dies.

We all know Satan is a liar (Genesis 3:4; John 8:44; Revelation 12:9), but we can sometimes forget when going through temptation. All the promises Satan makes won’t be fulfilled. All his threats are empty. But Christ has won the victory and all His promises are true.

This is not our home.

Everything King Tirian tries to do backfires on him and the good residents of Narnia. The kingdom was stealthily conquered by Calormen using a fake Aslan. He and his loyal followers found themselves forced through a stable door only to find themselves in a seemingly completely different world. Eventually, they realize Narnia is ending and they have reached Aslan’s country.

“Until we reach our final home, C.S. Lewis’ fictional world can provide encouragement in our walk with Jesus now.”

As Tirian and the friends of Narnia who have come from Earth explore this new world more fully, they start to speak about how it is “more like the real thing,” and what they previously thought of as the real world was more like a “shadow.” Then Lewis ends the book and the series with this:

“And for us this is the end of all the stories, and we can most truly say that they all lived happily ever after. But for them it was only the beginning of the real story. All their life in this world and all their adventures in Narnia had only been the cover and title page: now at least they were beginning Chapter One of the Great Story which no one on earth has read: which goes on forever: in which every chapter is better than the one before.”

We, like the faithful followers of Aslan in The Chronicles of Narnia, will face problems and difficulties in our journey, but this world, as it currently exists, is not our home. As Hebrews 13:14 says, “we do not have an enduring city here; instead, we seek the one to come.”

But until we reach our final home, C.S. Lewis’ fictional world can provide encouragement in our walk with Jesus now, including these lessons from each of the books. 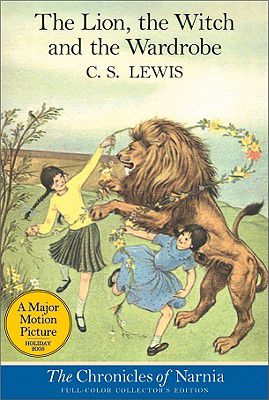 The Lion, the Witch and the Wardrobe

A full-color paperback edition of The Lion, the Witch and the Wardrobe, book two in the classic fantasy series The Chronicles of Narnia. This edition is complete with full-color cover and interior art by the original illustrator, Pauline Baynes.

Aaron Earls is a writer and online editor for Lifeway. He, his wife, and their four kids live outside Nashville, where he serves as a deacon and small group teacher at their church.