New. Everyone likes new things. Amazon is about bringing new things directly to your front door. Malls are about giving you shopping options so you can find new clothes and sundries. Apple releases new products every Fall and tempts you to upgrade or join “Apple Nation.”

“Starting new Bible study groups is one of the best things you can do for your church.”

Yes, new things catch people’s attention, generate excitement, and prove to the watching world that companies are forward-thinking as they innovate and renovate products and services. What does “new” have to do with church, where we tell the old, old story and value the traditions of the past? Can “new” survive and even thrive in this environment? The answer is a resounding yes.

Starting new Bible study groups is one of the best things you can do for your church. New groups demonstrate that the focus of the church remains on those people who do not yet know Christ as Savior. New groups prove that the church remains committed to reaching new people, training new group leaders, and discipling new people like we are commanded in the Great Commission. New groups show that the church understands the benefits of adding new groups to its current options for connecting people to one another through Bible study.

Starting new groups takes place in the second and third steps of his now-famous 5-step formula for Sunday School growth:

The five steps above are designed to primarily launch new groups that have not existed before. But we all know that your church’s current groups have the potential to start new ones.

How many businesses have you frequented over the last 30 days that are franchises? Chances are you ate at a restaurant that was franchised. Perhaps you had your oil changed by a business that was also a franchise. Franchises are everywhere, and they are the way businesses have expanded their influence and reached new customers. Starting new groups from current ones is a fine way to reach new people for Bible study. Instead of asking groups to “split, divide, or birth new ones,” maybe the term “franchise” is a better one that sounds more pleasant than splitting or dividing people!

Experience has taught me that groups are most willing to franchise when the following has taken place:

To learn more about starting new groups, pick up a copy of Lifeway’s book based on Arthur Flake and his 5-step formula. Building a Disciplemaking Ministry: The Timeless Principles of Arthur Flake for Sunday School and Small Groups will help you more fully understand the basics of starting new groups and expanding your church’s teaching-reaching ministry. 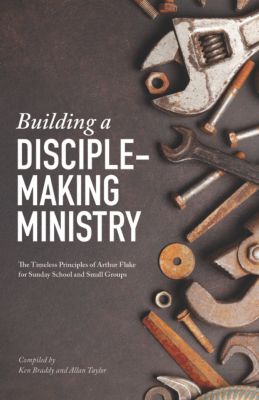 Building a Disciple-making Ministry looks at the principles and techniques used by Arthur Flake to reestablish Bible study groups after the Spanish Flu pandemic in 1919.

Ken Braddy is Lifeway’s Director of Sunday School and manager of adult ongoing Bible studies. He blogs regularly about Sunday school and groups at kenbraddy.com