“According to most studies, people’s number one fear is public speaking. Number two is death. Death is number two. Does that sound right? This means to the average person, if you go to a funeral, you’re better off in the casket than doing the eulogy.”
― Jerry Seinfeld

Let me tell you about my history with public speaking.

In 6th grade, I had to give a speech to run for class president. Here’s what I remember from that speech…

Hello, seventy-four middle schoolers I have known intimately since I was five years old. My name, as you know, is Scarlet Elizabeth Wessel, and I’m here to tell you how I can change your life if you vote for me as class president. What is it that you’re hoping for this year? Miniature vending machines in every locker? A giant swimming pool in the middle of the parking lot? (Long pause for expected laughter that never came because those aren’t jokes and I wasn’t funny.) Anyway, I think you should vote for me…

… No public speaking for seven years…

Then, in college, I took one public speaking class because I had to. I’m pretty sure I talked about abstinence, voluntarily, to my entire class at my very public, very non-Christian, most definitely anti-abstinent class.

And after that, I never public-spoke again and pursued a career (writing) that could be done while in sweatpants, eating Mexican food, alone at my house, with no one looking at me.

It was dreamy. It was wonderful. I spent years typing and chip dipping and not public speaking.

But, here’s the thing. When you publish books, people seem to think you also public speak.

This is not true, obviously, but by the time I found myself with a couple of books out and churches asking me if I would come to their city to share my testimony, I felt like God was telling me not to say no.

Fearing What God Is Asking

I would definitely, completely, and always rather be sitting in the audience than standing on the stage. Even better, I’d rather be live streaming that talk from my bed with the nachos, and we’ve covered all that.

So, it’s been strange saying “not no” to serving the Lord in this way that is very uncomfortable to me.

“Regardless of what we are asked to do, the cross is full to the brim with power.”

But, to my surprise, meeting women and talking to them about walking with Jesus when we feel afraid, has become something of a gift in my life. As I fight my own propensity to panic, Jesus is letting me help other people anyway—even in my weakest areas and in the most unfamiliar-to-me way.

It encourages me to find similar callings on similarly weak and unqualified people in Scripture.

But Moses replied to the Lord, “Please, Lord, I have never been eloquent—either in the past or recently or since you have been speaking to your servant—because my mouth and my tongue are sluggish.”The Lord said to him, “Who placed a mouth on humans? Who makes a person mute or deaf, seeing or blind? Is it not I, the Lord? Now go! I will help you speak and I will teach you what to say.” Moses said, “Please, Lord, send someone else.” – Exodus 4:10-13

I love that his fear is recorded and I love God’s response: “Who placed a mouth on humans?” In other words, “Are you seriously trying to make this about YOU right now? I MADE MOUTHS.”

Sinner. Murderer. Pretty obvious jerk. The last type of person you might invite to speak at your church event. And yet, God called him out of his self-righteousness and sin and asked him to preach. Paul said, “Even if I am untrained in public speaking, I am certainly not untrained in knowledge” – 2 Corinthians 11:6a.

But guess what, he also said, “For Christ did not send me to baptize, but to preach the gospel, not with eloquent words of wisdom, lest the cross of Christ be emptied of its power” (1 Corinthians 1:17).

I’ve taken so much comfort in that.

Regardless of what we are asked to do, the cross is full to the brim with power. We are recipients of grace and mercy. Jesus died the death that me and you and Moses and Paul deserved, and rose victorious over it, making us right with God. What more do we need?

My fear of public speaking was mostly about eyes being on me. But, really, it’s about helping eyes be on Jesus. And we all do that—whether it’s in sweatpants or on a stage, whether it’s in a microphone or a Sunday School circle time or in the Kroger 10-items-or-less line, we all get to tell people around us that Jesus is enough. That He is good. That He loves us. That because of His death and resurrection, our souls are safe.

Maybe God is asking you to share His love with a neighbor, or a classmate, or at a local church or radio station or the guy sitting next to you at the airport. Maybe you’re like me and tempted to focus on your own weakness. Maybe you’re reading this and regretting it because you don’t like feeling uncomfortable!

“But he said to me,’My grace is sufficient for you, for my power is perfected in weakness.’ Therefore, I will most gladly boast all the more about my weaknesses, so that Christ’s power may reside in me” – 2 Corinthians 12:9

We are all called. And Christ’s power resides in our weakness. We are all likely going to be called to do things that require us to depend on the Lord. But you know what? He’s pretty dependable. So, when He asks, we serve, and we can’t serve Him and advance His kingdom if we’re only willing to do it with nachos and sweats.

This is what I’m learning. And, wow, has the Lord given me joy in it. There’s peace in it. He keeps giving me the gift of His presence and connections with other believers. I’m really glad I didn’t say no.

So, ask God how He wants you to share. And then say yes. Finish your nachos, and say yes. 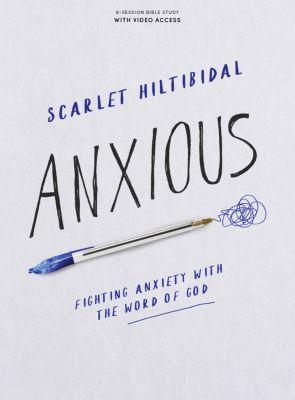 Join Scarlet Hiltibidal in this 8-session study to learn how we can practically take hold of the perfect peace that is only available through God as we dive deeply into His Word, embrace the practice of prayer, and live authentically in the support of our communities of faith.

Scarlet Hiltibidal is the author of Afraid of All the Things, He Numbered the Pores on My Face, and the Anxious Bible study. She writes regular columns for ParentLife Magazine and devotionals for She Reads Truth and enjoys speaking to women around the country about the freedom and rest available in Jesus. Scarlet has a degree in biblical counseling and taught elementary school before she started writing. She and her husband live in Southern California where she loves signing with her three daughters, eating nachos by herself, writing for her friends, and studying stand-up comedy with a passion that should be reserved for more important pursuits.