As Christians, we’re called to make a difference in this world and be difference makers. But how do we do that? In this video, Senior Pastor Gregg Matte walks through the steps in which we become difference makers and, through Jesus, are able to change the world.

What it looks like to be a difference maker in our daily lives and how we actually make that happen in our lives is this: first of all, God has to do something in you before He can do something through you.

So being a difference maker isn’t just jumping out there and going for it. It’s saying, “God, I want You to work deeply in me. I want You to do something inside of me.” And that as He does something in us through salvation and through our Christian growth, then He wants to do through us. And being a difference maker is when the action gets put to what He’s done inside you.

So the first thing is letting God do something in you. Spending time with Him, enjoying Him in prayer, reading the Scriptures, journeying with Him in your faith. And then from that place, saying, “Okay Lord, I want to be watchful and I want to be courageous. I want You to do something through me.”

Being watchful is key. Where is God moving? Where can I join Him? What can I do to step into the place where He is? What are the circles that God’s put you in? Where has He placed you? What school do you go to? What neighborhood do you live in? Where do you work? What’s going on in your life? Who do you intersect with? And when that happens, you’re able to say, “Lord, I want you to use me in that place at that time.” And now you’re watchful. You’re looking for it. You’re saying, “God, how can You use me?”

There’s another group in our city in Houston, the SWAT team actually. One of the police officers came to our church. They kick in the doors, they knock things down, they go after the bad guys, and they named themselves the Difference Makers. And underneath their bulletproof vests they wear difference makers t-shirts. So they want to make a difference in our city by catching the bad guys.

So that’s how you put it in. You’ve got to have it being watchful. Where am I? Where has God placed me? A little league baseball coach is far different than a SWAT team member.

Also, secondly, you have to be courageous, saying, “I want to jump out in courage. I want You, Lord, to use me.” A difference maker is a person of faith. It’s not easy. You gotta step out. You gotta go for it. There’s gonna be that moment where you go, “Ah, Should I say something? Should I not say something? Should I give? Should I go? What should I do?” And when you step out as that kind of difference maker courageously you’ll find that the Lord, because He’s done something in you, He’s gonna do something through you. And those things of watchfulness and courage make a huge difference.

Let me give you two other examples of how you put this in your daily life. Far different ends of the spectrum.

First example is a lady and a husband whose son was killed in a tragic accident. I know them well. I was at the house just a couple days after they had the accident. I preached the funeral. And their misery has become their ministry. And so what’s happened is they’ve used this painful thing they’ve gone through to make ministry or to give ministry to people so that they could be difference makers in a journey that nobody wants to be on. So that’s one mom.

Now let me give you another mom on the other side of the spectrum. She had a burden for sex trafficking and human trafficking. So she just called together some moms on Tuesday night after all the kids would be in bed. They would head over to this lady’s house. They’d have some brownies. They’d have some cookies. And they would pray the wallpaper down off that wall. I mean just asking God for great things.

And my wife was a part of that group and I would say to my wife, “Your prayers are being answered in the Chronicle, in the Houston Chronicle, the newspaper.” Because we’d see all these brothels being busted and people being arrested. God was using these moms. This actually turned into a ministry that now has twenty-plus churches that partner together against human trafficking.

So you look at two different moms, one in grief and one in sorrow of another way of being broken, and saying, “I want to be a difference maker.”

So what is a difference maker? Someone that God has done something in them and then God’s gonna do something through them. How do you do that? Well,  you walk watchfully and you walk courageously and you step out and you let God do whatever He wants to do. And if you’ll take that step, you’ll be a difference maker in a great way.

Let me give you the difference maker declaration that’s so just dear to my heart and also in our church as well. This is what it says, we would say this together as a church:

I was made for more than watching. I’ve been given a history-changing, difference-making, spirit-empowered legacy to leave. Jesus, I ask You to do something deeply in me and clearly through me as I pray, give, and go in Your love. I am a difference maker in Jesus name. Amen. 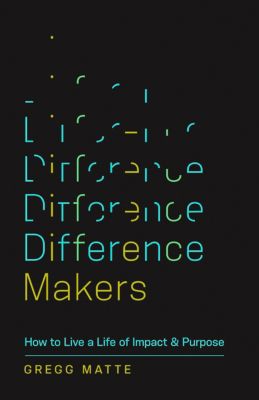 When you look at the needs in the world around you, it is easy to feel overwhelmed. But you were created for more than watching. You have a history-changing, difference-making, life-giving, Spirit-empowered legacy to leave.

Gregg Matte is the senior pastor of Houston’s First Baptist Church. Before coming to Houston in 2004, Gregg founded Breakaway Ministries at Texas A&M University — the largest college Bible study in the nation. Gregg is the author of Finding God’s Will (2010), I AM Changes Who i Am (2012), Unstoppable Gospel (2015), and Difference Makers (2019). He has also written Bible study guides The Highest Education: Becoming a Godly Man and Birds and Bees: A Conversation about God, Sex, and Sexuality.