In this video from Gospel Above All with Pastor J.D. Greear, pastor and former president of the International Mission Board, David Platt, explains the misconceptions American Christians tend to have whenever they think about missions and missionaries. Learn more about Gospel Above All here.

David, I’ve heard you often say this, that there is a kind of a fundamental perspective about the life that needs to change, especially for the American Christian. What do you mean when you say that?

I would point primarily to Scripture and to a point in my life where I saw this in Scripture: That from cover to cover in the Bible God has created us, crafted us, saved us, blessed us, ultimately for the spread of His glory in the world. Specifically among all the nations. And every Christian is created with that purpose.

So when we think mission, the spread of the glory of God, that’s not a compartmentalized program in the church for a select few people who are like called to that. That’s actually the purpose every one of us has breath. That’s why we’re here on this earth, for the spread of God’s glory.

I just think that when that perspective really takes root in our heart it changes everything about the way we think about our life, marriage, family, future, job, resources. It shapes everything.

So you think every Christian is called to missions?

In one sense, yes. So every Christian has the spirit of Christ in them for the spread of the gospel through them. So yes in that sense.

The problem is there’s 2.8 billion people in the world who don’t have anybody who’s a Christian around them living on mission right where they are. So at some point somebody’s got to leave where they are to go where the gospel has not yet gone. And I think that’s oftentimes the way we use the term missionary that I don’t want to lose.

So, yes, every Christian is supposed to be on mission where we live and then be open to going wherever God might lead. 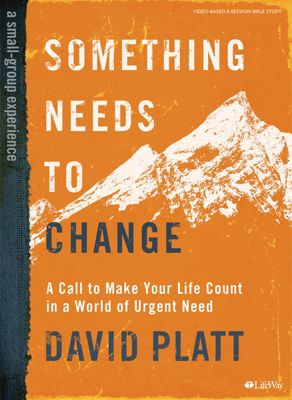 Something Needs to Change

When David Platt took a trip to the Himalayan mountains, the staggering hardship he witnessed transformed the trajectory of his life. Now, in this study, he’s inviting you to reflect and wrestle with him as he describes his life-altering trek through the Himalayas.

David Platt serves as pastor at McLean Bible Church in Washington, D.C. He is the founder and president of Radical, a resource ministry that serves churches in accomplishing the mission of Christ.