Photo courtesy of the North American Mission Board

Growing up in a Southern Baptist church, I heard the name “Annie Armstrong” leading up to every Easter. The Annie Armstrong Easter Offering and the Lottie Moon Christmas Offering were annual events in the churches of my childhood, and I had a vague notion that these women had something to do with missionary enterprises. I knew Lottie Moon had lived and worked as a missionary in China, but who was Annie Armstrong? And why did we have a special giving campaign named after her?

Annie Walker Armstrong was born in Baltimore, Maryland, in 1850. Raised by their mother after her father’s death when Annie was two years old, the five Armstrong children were active in church and learned about their mother’s Christian faith. Annie’s early teenage years saw the Civil War cause division among the population of Baltimore and in her church congregation. One Sunday during the war, Annie’s pastor told his congregation, “The religion of Jesus Christ gives peace in the midst of trouble.” Wanting this peace for herself—the kind of peace she saw in her widowed mother—Annie trusted Jesus as her Savior that day.

Through her mother’s work supporting foreign missionaries, Annie developed her own desire to raise money to send missionaries around the world. But when she was 30, Annie heard a presentation about home missions. Previously, she had focused solely on supporting mission work in foreign countries. But as she heard about the work among Native Americans who had been forced into poverty on reservations, Annie had a strong desire to help them. She worked to form a home missions society to raise money and build a school for children in what would become the state of Oklahoma.

As the work grew, so did the need for a unified organization. Annie was elected the first president of the new Woman’s Baptist Home Mission Society of Maryland. The Society’s work included supporting missionaries and efforts in foreign countries, on the American frontier, and in their own city of Baltimore. Annie had a heart to meet both physical and spiritual needs.

Eventually, Annie’s work grew into the Southern Baptist Woman’s Missionary Union, although she and the other female leaders faced opposition from some of the men in Southern Baptist leadership. Thirty years before the nineteenth amendment granted women the right to vote, it was an uphill battle to get support for their organization. But Annie felt strongly that Southern Baptist women would best be able to help the mission efforts of their churches through their own organization. She believed their work was “a force fore-ordained of God.”

An offering of time

Annie’s tireless efforts saw missionaries supported around the United States and the world. She also worked to gain support for two of the first Black female Baptist missionaries. Passionate about seeing individual Baptist churches giving to missions, she was constantly writing letters to pastors and leaders, hoping to gain their support. In one year alone, she wrote more than 18,000 letters. Working long hours, traveling by train and couch all over America, and serving in Baltimore, Annie was frequently described as indefatigable. She once wrote to a Baptist leader,

I have no doubt you think I am extremely persistent, but if I get hold of an idea which seems to me to be a good one, I somehow do not feel comfortable until I see it carried out, or find that it is out of the question to do anything with it.

It wasn’t just supporting other missionaries that kept Annie busy. While she never married or had children, she served as a Sunday School teacher for children from toddlers to age 12 for over 50 years. She volunteered at a shelter for poor children. She worked to find creative ways to teach children about missionaries and to raise missions support.

Perhaps one of Annie Armstrong’s most rare traits was her refusal to accept payment for her work, saying, “it has been a great joy to me that I could feel that while I had not a large amount of money that I could give to the cause of missions, yet I was making an offering of my time.” She wanted no part in fame or riches, but instead was determined “to do the most good and to the greatest number.”

“She just knew God had given her the strength to get things done to the best of her ability.”

Lest we be tempted to put Annie on too high a pedestal, however, it’s important to note she had challenges in leadership. At six feet tall, she was not only an intimidating sight to many people, but she could also be an intimidating leader due to her immense determination. She experienced conflict with other WMU and SBC leaders. In a collection of her letters, we see many of the conflicts she ran up against, and at times caused. Annie was sensitive to criticism, but she also asked others to help her see when she was wrong.

Annie Armstrong died in 1938 at the age of 88. Her pastor described her as a “dreamer in action … one who dreamed her dreams and then made her dreams come true.” She didn’t see herself as anything special; she just knew God had given her the strength to get things done to the best of her ability.

One of the best things we can learn from Annie Armstrong’s example is that faithfulness might require us to move around the world, but it could also look like writing letters, teaching Sunday School, and consistently working to support those who are called in other ways.

In 1934, the Woman’s Missionary Union recognized Annie’s lifetime of work by naming the annual Easter offering for home missions in her honor. Every dollar raised for the Annie Armstrong Easter Offering supports the work of the Southern Baptist missionaries involved in church planting and compassion ministries in the United States and Canada. 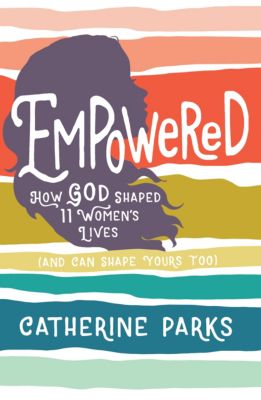 Through the inspiring stories of eleven faithful women, Empowered will show girls that God is the true source of their power, strength, and purpose in life.

Catherine Parks writes and lives in Nashville, Tennessee, with her husband, two children, and a cute dog named Ollivander. She's the author of four books, including Empowered and Strong, collections of biographies for middle-grade readers. You can find more of her writing at cathparks.com