It was 2005. Vacations weren’t typical for our young family in those days, but for Christmas one year we were given a Disney vacation and the time had come for planning our fall trip.

My wife and I were going through dining reservations, where to stay, specific dates, what parks to visit and when, all the fun stuff. Whether to fly or drive wasn’t a question. Not only was driving cheaper, but I have always loved pointing the car south and putting a little distance between the routines of Monday through Friday and a destination on a southerly course. It was in this exciting-yet-pedestrian moment when she very casually asked, “Do you want to visit your dad on the way?”

Our route would take us straight down the heart of Georgia and within a few miles of where my father lived. And it hadn’t even crossed my mind.

My parents divorced when I was four. My mother and I, she pregnant with my brother at the time, left south Georgia and moved to rural western Kentucky. Since that time, I had seen my father, maybe, ten times—maybe five times. To be honest, I didn’t even know. I suppose phone calls were more frequent than visits, but often those were from a man who had too much drink calling to make promises he had no intention of keeping.

And so, this simple question jarred me. Even though my initial answer was a very hard no—why would I subject my family to that kind of thing on the way to Disney World?—remembering all the sermons about broken relationships through the years prompted a change of heart. We planned the detour.

At this point I will make a long story short. I was nervous. I was in touch with my paternal grandmother and my aunt for the arrangements, my heart only willing to give so much to this event, and through them I learned that my dad wanted to cook for us. “This may actually be normal,” I allowed myself to think. “It could be really cool for him to spend time with my wife and daughters.” Like any father, I was and remain proud of all of them. I gave in a little more.

Right away I knew something wasn’t right when we arrived. Another family member could tell I was picking up on something, pulled in closer, and said, “Your father was nervous about being with all of you. He’s been drinking all day just trying to get his nerves in check.”

I didn’t know what to do. Do I confront him? Do I pick up and leave with my family? Do I make a scene? Do I just roll with it? Do I publicly forgive and show grace?

We opted to stay. The Low Country Boil was great. I don’t remember a thing about any conversation, but what I do remember is another family member at one point yelling out the back door, “Brian, your father is going to bed. Can you help us get him to bed?” And it wasn’t bedtime.

I went in and helped get him to the bedroom and pulled the sheet over him. I turned out the light and made a move toward the door when he said something to me. “What did you say, dad?” I had to lean a little closer to understand what he was asking. “Can you turn the fan on?,” he asked. I did as he asked and closed the door behind me. My father died before I saw him again. Those were his last words to me.

I share all of this not to disparage the memory of dad—quite the opposite. Nor do I share this to make any sort of contribution to today’s cultural vernacular about the favor I did not or did not enjoy. It is the simple matter that up until the day he died I would have welcomed a relationship with my father. Accordingly, there are a handful of myths I’d like to dispel about what being a father is, at least in terms of what I think God has revealed to me in this way.

1. The Myth of the Big Moment

Your legacy as a father is not as much about the big moments but the thousands of middle moments between those moments. I’ve heard some refer to it as the art of being present and that works, too. Dads need to be there for the big moments, but please don’t make the mistake of thinking that the thousands of middle moments along the way are optional.

I played a lot of baseball games, wrestled a lot of matches, graduated from multiple institutions, and my dad wasn’t at a single one of them. But if I could do just one thing with him, I think it might be throwing a baseball back-and-forth in the yard and talking about what it’s like to grow up and what I might expect in the coming years. Don’t trade the big moments for those middle moments.

2. The Myth of the Blown Moment

This one is easy. When my family and I were leaving the sleepy little south Georgia town the next morning, making the turn toward the most magical place, I lost it. But you know what was driving the emotion? Not loss, which still surprises me to this day, but redemption.

For maybe the first time in my life I felt like I understood redemption. That this man who had forfeited so much at the hands of a destructive lifestyle, that could no more not drink as not breathe, that he was not beyond the redemption of Jesus; that Jesus’ blood bought that back—in that moment I got it. I really got it. And it was beautiful.

Fathers, it’s never over. My father was hardly a father to me for a second of his life, but I would have put it all behind me to have anything close to a relationship with him even to the day he died. Every indication might be that you’ve blown it, whether in a small way or a big way, but you owe it to your son or daughter to keep giving it your best shot. And sons and daughters, sometimes grace is required, and trust me when I say I know what that risk feels like.

3. The Myth of Perfection

Here’s another easy one. In our family we’ve always said that love covers a multitude of mistakes. You’re going to make mistakes as a father.

“Here’s the big reveal: you’re not going to get everything right.”

I was talking with a mentor about my anxiety with finances years ago when I said something along the lines of, “I just hope my dysfunction doesn’t create an anxiety in my girls.” He practically spit out the water he was drinking, saying, “Brian, of course it is. But God is bigger than that.”

These represent only a handful of fatherly attributes that will keep you on the path this Father’s Day. 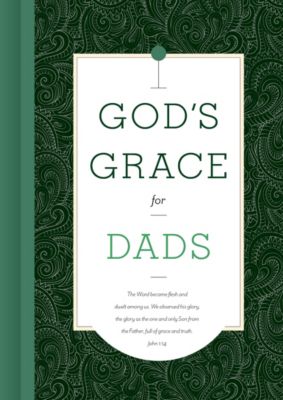 If God’s grace could talk, it would sound exactly like what this book says in every Scripture on every page. And it wouldn’t sound nearly as old as it actually is, because it’s new every morning and within instant reach at every moment. It would sound like God, talking directly to you . Because He is. And does. And always does it with grace.

Brian leads an arm of Groups Publishing at Lifeway Christian Resources. He is an elder at Grace Church, Gallatin TN and lives in Hendersonville with his wife Karen, also a publishing leader at Lifeway. He blogs somewhat regularly, dabbles in freelance writing, and has two daughters, Ashton Burrus and Schuyler Daniel. You can follow him @bcdaniel on both Twitter and Instagram.